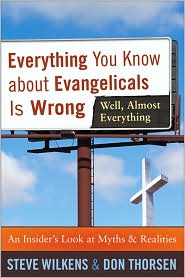 Steve Wilkens and Don Thorsen, Everything You Know about Evangelicals Is Wrong (Well, Almost Everything): An Insider’s Look at Myths and Realities (Grand Rapids, MI: BakerBooks, 2010). $16.99, 224 pages.

What is evangelical Christianity?

In Everything You Know about Evangelicals Is Wrong, Steve Wilkens and Don Thorsen set out to discover “an adequate and accurate definition” by identifying and critiquing several caricatures of the movement on the basis of “the empirical realities of evangelicalism’s history, its present composition, and its trajectories toward the future.”

The chapter titles identify the caricatures. Readers learn that “Evangelicals Are Not All…”

Wilkens and Thorsen don’t deny that some evangelicals are any—or all—of these things. Rather, they argue that “we should not confuse the social [or theological] agendas of particular evangelicals with evangelicalism’s agenda.”

Caricatures aside, evangelical Christianity encompasses a diversity of theological commitments, denominational loyalties, political affiliations, ethnic identities, and social classes. It always has. The leaders of the Great Awakening—Jonathan Edwards, George Whitefield, and John and Charles Wesley—exemplify this diversity. Edwards and Whitefield were Calvinists. The Wesley brothers were Arminians. Edwards was a Congregationalist. Whitefield and the Wesleys were Anglicans. Edwards died before the American Revolution, but his sons were Patriots. John Wesley publicly denounced the Revolution. He also published expurgated versions of Edwards’ writings on revival and preached Whitefield’s funeral sermon.

At the self-acknowledged risk of oversimplification, Wilkens and Thorsen settle on this definition of evangelical Christianity: “Evangelicals are people of the Great Commission.” In the Great Commission, Jesus commanded his disciples to “make disciples of all nations” (Matthew 28:19). This is “the basic impulse of evangelicalism,” which derives its very name from euaggelion, the Greek word for “gospel.”

I heartily recommend Everything You Know about Evangelicals Is Wrong to anyone, whether an outsider or an insider, who struggles to understand the meaning and significance of the evangelical movement. The book debunks stereotypes, complexifies issues where needed, and simplifies definitions where possible. Most importantly, clarifies the nature of evangelical Christianity, which has tremendous influence in North America and growing influence worldwide.

Part 2 of a 7-week series on how God’s Spirit guides us.

Dr. George O. Wood: “What are our homes for? They are designed by the Lord to be places of healing, refuge, evangelism, and training. That’s how Jesus used the home.”

The Home and the Lesson, posted with vodpod

“The Importance of the Holy Spirit” by Doug Clay, posted with vodpod

In this video, Dr. Jim Bradford begins a seven-week series on how the Holy Spirit guides us.

“Visions and Voices” by Dr. Jim Bradford, posted with vodpod

What is the relationship between logic and love?

For some, there is no relation. “Love Is a Fallacy” by Max Shulman tells the story of a smart college freshman who pines for Polly Espy, the girlfriend of his big-man-on-campus roommate, Petey Bellows. Petey, however, pines for a raccoon coat, which is all the rage among BMOCs. In exchange for a chance to date Polly, the freshman gives Petey his father’s raccoon coat.

Unfortunately, Polly’s intelligence does not match her beauty, so the freshman sets out to school her, beginning with logical fallacies. Patiently he teaches her the fallacies of hasty generalization, post hoc, ad misericordiam, and poisoning the well, among others. After five dates, satisfied that she has risen to a level of intelligence acceptable to him, the freshman declares his love for her.

She then proceeds to point out the logical fallacies inherent in each of his arguments in favor of the match and instead declares her love for…Petey Bellows. “Can you give me one logical reason why you should go steady with Petey Bellows?” he screams. “I certainly can,” she replies. “He’s got a raccoon coat.”

To quote Blaise Pascal: “The heart has its reasons which reason knows nothing of.”

In Think, John Piper begs to differ with people who see no relationship between logic and love. There is a relationship between the two, a mutually enriching one at that. “The fires of love for God need fuel. And the fires of love for God drive the engines of thought and deed. There is a circle. Thinking feeds the fire, and the fire fuels more thinking and doing. I love God because I know him. And I want to know him more because I love him” (89). This mutually enriching relationship encompasses our love for people as well. Indeed, “All scholarship is for the love of God and man” (167).

“Coming to Faith through Thinking” shows that reasoning plays a role in conversion and clarifies how. The two chapters in this section effectively rebut the popular evangelical sentiment that you cannot argue a person into the kingdom of God. True, conversion encompasses more than thinking, but never less.

“Facing the Challenge of Relativism” lays bare the immorality and incoherence of relativism using a dialogue about religious authority between Jesus and the Pharisees (Matthew 21:23–27). The Pharisees asked Jesus, “By what authority are you doing these things?” In response, Jesus asked, “John’s baptism—where did it come from? Was it from heaven, or from men?” The Pharisees realized that either answer would get them into trouble, so they demurred. Piper comments: “People don’t embrace relativism because it is philosophically satisfying. They embrace it because it is physically and emotionally gratifying. It provides the cover they need at key moments in their lives to do what they want without intrusion from absolutes.” It is immoral, in other words. It is incoherent because “no one is a relativist” at the bank” (102).

“Facing the Challenge of Anti-intellectualism” examines six spiritual reasons people give for anti-intellectualism. Two of these reasons arise from misinterpretations of biblical passages, namely, Luke 10:17–24 and 1 Corinthians 1:20–24. The former states, “You [God] have hidden these things from the wise and understanding.” The latter, “In the wisdom of God, the world did not know God through wisdom.” Piper carefully exegetes these passages and concludes: “the warnings that Jesus and Paul have sounded…are not warnings about careful, faithful, rigorous, coherent thinking in the pursuit of God. In fact, the way Jesus and Paul spoke these very warnings compels us to engage in serious thinking even to understand them. And what we find is that pride is no respecter of persons—the serious thinkers may be humble. And the careless mystic may be arrogant” (154).