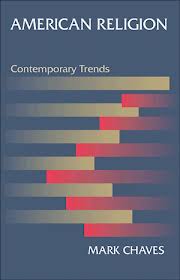 American Religion by Mark Chaves contains little good news for America’s religious leaders. Subtitled Contemporary Trends, the book examines continuity and discontinuity in American religious belief and practice over the last 40 years. While there are significant points of continuity in this time period—of belief in God and weekly attendance at religious services, for example—overall, the trend is toward discontinuity. “The religious trends I have documented point to a straightforward general conclusion,” Chaves writes: “no indicator of traditional religious belief or practice is going up” (emphasis in the original).

Chaves’ primary data sets are the General Social Survey (GSS) and the National Congregations Study (NCS), which he directed. Both surveys were conducted by the National Opinion Research Center of the University of Chicago. GSS has been conducted annually since 1972 and NCS in 1998 and 2006–7. Chaves is professor of sociology, religion, and divinity at Duke University, and his book is published by Princeton University Press. The book is brief (160 pages), but its data, author, and publisher make it an authoritative text whose conclusions religious leaders must wrestle with.

Here are some of those conclusions:

Chapter 9 summarizes the book’s findings this way: “If there is a trend, it is toward less religion.” Chaves’ is ambivalent about whether this trend is good or bad for America as a whole. On the one hand, he writes, “Increased tolerance of, even appreciation for, religions other than one’s own, described in chapter 2, is good news for our increasingly pluralistic society.” On the other hand, “Countering this positive trend…is the increasing attitudinal difference between the more religious and the less religious.” He goes on to write, “It would be ironic and unfortunate if Americans’ increasing appreciation for religions other than their own becomes overwhelmed by increasing hostility between the more and the less religious.”

Of course, the New Testament church faced even greater odds and nonetheless grew in size and influence. But they were converting pagans to the faith of Jesus Christ. Can we experience a similar revival in a post-Christian society? In my opinion, that’s the fundamental question the American church needs to answer. And if yes, how? That’s the fundamental challenge facing American religious leaders today.

One thought on ““No Indicator of Traditional Religious Belief or Practice Is Going Up”: A Review of “American Religion” by Mark Chaves”