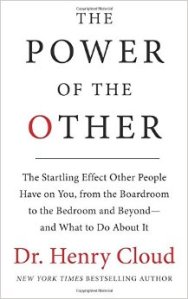 Henry Cloud, The Power of the Other: The Startling Effect Other People Have on You, from the Boardroom to the Bedroom and Beyond—and What to Do About It (New York: Harper Business, 2016).

Leaders often say, “It’s lonely at the top.” That’s true, of course—at least to an extent—but it’s also tragic. Leadership doesn’t have to be lonely.

In fact, as Dr. Henry Cloud argues in The Power of the Other, success depends on relationship. “The undeniable reality,” he writes, “is that how well you do in life and in business depends not only on what you do and how you do it, your skills and competencies, but also on who is doing it with you or to you” (emphasis in original).

But not just any relationship! What leaders need is “specific qualitiative relational connectedness” (emphasis in original). This is what Cloud calls “True Connection” or “Corner Four relationship.”

In Corner One relationships, leaders feel “disconnected.” He writes: “True connection always means being emotionally and functionally invested in other people, in a give-and-receive dynamic. Disconnection lacks something, in one direction or the other—either in the giving or the receiving. Truly connected people do both. They are emotionally present and able to give and to receive.”

In Corner Two relationships, leaders have “a bad connection.” They experience a “connection, preoccupation, or pull toward a person who has the effect of making you feel bad or ‘not good enough’ in some way” (emphasis in original). Think of a son trying to gain the respect of a hypercritical dad or an employee trying to please a boss who rarely praises employees.

In Corner Three relationships, leaders form a “seductively false ‘good connection.’” In this corner, leaders gravitate toward relationships that make them feel good. They cultivate people who flatter and praise them but overlook people in the organization who bear bad news. People in high-stress jobs who live in Corner Three often find themselves engaging in extramarital affairs or using addictive substances to maintain an artificial “high.”

None of these corners is a good place to be. Leaders need to go to Corner Four. Here, leaders form a “real connection” with others, “one in which you can be your whole self, the real, authentic you, a relationship to which you can bring your heart, mind, soul, and passion. Both parties to the relationship are wholly present, known, understood, and mutually invested. What each truly thinks, feels, believes, fears, and needs can be shared safely.”

When we truly connect with others, they help us draw out the full potential of who we really are and what we can truly be. Relationship makes authenticity possible.

Cloud opens the book with a story that I’ll close with. It’s about “Hell Week,” the final week of training for Navy SEALs. That week is “a grueling exercise requiring the utmost physical and mental endurance, pushing these already-at-the-top specimens to their absolute limits.” Cloud’s brother-in-law Mark was a Navy SEAL who was later killed in Iraq. In the days after Mark’s death, Bryce, one of Mark’s fellow SEALs told, how he almost failed “Hell Week.”

He was swimming in the cold Pacific Ocean after a week of grueling training. A way from the shore, he “hit the wall.” Cloud comments, “He tried to will himself to keep going, but his body would not obey.” It was at that moment that Bryce looked up and saw Mark, who had already reached land. Mark caught his eye, gave him a fist pump, and yelled an encouraging, “You can do it!” And that was all Bryce needed. “His body jumped into another gear,” Cloud writes, “into another dimension of performance that he had not had access to before…That is the ‘power of the other.’”

To be one’s true self, to reach one’s full potential—whether as a leader, a spouse, a parent, or whatever—you and I need others. Authenticity requires relationship. That’s what The Power of the Other is all about.

I recommend the book highly.

P.S. If you found my review helpful, please vote “Yes” on my Amazon review page.