“Millennials, and now Gen Z, aren’t going to ruin the world or the church,” write David Kinnaman and Mark Matlock in their new book, Faith for Exiles. “We, the Christian community, would do well to put our confidence in them.”

I’m George P. Wood, executive editor of Influence magazine and your host. In this episode of the Influence Podcast, I’m talking to David Kinnaman about how to make disciples of young adults in our current culture. Kinnaman is president of Barna Group and the author or coauthor of numerous books, most recently Faith for Exiles: 5 Ways for a New Genration to Follow Jesus in Digital Babylon, published by Baker Books.

This episode of the Influence Podcast is brought to you by My Healthy Church, distributors of Tru Fire curriculum:

From Preschool to Middle School, Tru Fire digital curriculum equips teachers with engaging lessons that help students connect with the Holy Spirit and respond to Him. Tru Fire is the Pentecostal curriculum your church is looking for.

P.S. This podcast is cross-posted from InfluenceMagazine.com with permission.

P.P.S. I reviewed Kinnaman and Matlock’s Faith for Exiles here. 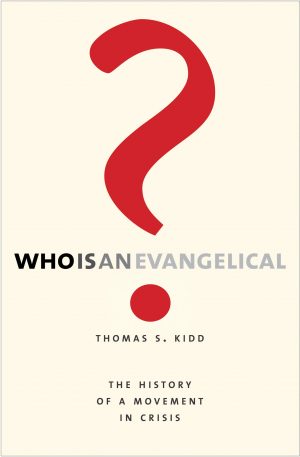 The word evangelical comes down to us via Latin from the Greek word εὐαγγέλιον, meaning “good news.” In the Reformation Era, it described Lutherans and other Protestants who broke from the Roman Catholic Church, emphasizing the good news of justification by grace through faith. Beginning in the 18th century, however, it came to describe a particular movement within Anglophone, trans-Atlantic Protestantism, which Thomas S. Kidd calls “the religion of the born again.” He traces the history of that movement in his new book, Who Is an Evangelical?

Kidd is the James Vardaman Distinguished Professor of History at Baylor University and a scholar of the era of the American founding. He is author of numerous books, including The Great Awakening; biographies of Patrick Henry, George Whitefield, and Benjamin Franklin; and the forthcoming America’s Religious History. In Who Is an Evangelical? he aims to “introduce readers to evangelicals’ experiences, practices, and beliefs, and to examine the reasons for our crisis today.” More on that crisis in a moment.

Evangelicals, as Kidd defines the term, are “born-again Protestants who cherish the Bible as the Word of God and who emphasize a personal relationship with Jesus Christ through the Holy Spirit.” These three markers — “conversion, Bible, and divine presence” — make evangelicalism a loosely defined movement rather than a tightly defined denomination or theological school. Understood this way, evangelicalism has always been international, multiethnic, and transdenominational.

(Side note: I am an ordained Assemblies of God minister and executive editor of the denomination’s Influence magazine. The AG is a classical Pentecostal denomination whose distinctive doctrine is baptism in the Holy Spirit evidenced by speaking in tongues. Though this doctrine distinguishes the AG from other evangelicals, there is no doubt that the AG specifically, and Pentecostals generally, are evangelicals. Indeed, the Assemblies of God was a founding member of, and is the largest denomination within, the National Association of Evangelicals.)

Today, unfortunately, the term evangelical serves as “an ethnic, cultural, and political designation rather than a theological or devotional one,” according to Kidd. For example, you undoubtedly have heard that 81 percent of evangelical voters in the 2016 presidential election cast their ballots for Donald Trump. Pollsters identified “evangelicals” with “white religious Republicans.” This identification was problematic for at least two reasons:

This “politicization” of evangelicalism is a crisis for the health of the movement long term. It trades the traditional emphasis on conversion, Bible, and divine presence for an emphasis on partisan politics, leaving in its wake “the widespread perception that the movement is primarily about obtaining power within the Republican Party.” In the process, it overlooks the tremendous growth of evangelical forms of Christianity among the very racial and ethnic minorities — black, Hispanic, Asian — who represent a rising tide in America’s demographic sea. At the very moment when America’s Christians need to speak with a united voice across a wide range of social and ethical issues, politicization makes it harder for us to do so. United by faith, evangelicals are divided by politics.

Kidd’s brief survey of evangelical history shows that “the tension between the spiritual and political goals of evangelicals has existed since the 1740s,” the era of the Great Awakening, when George Whitefield, Jonathan Edwards, and John Wesley were leading Anglophone evangelicalism. Politics, in a sense, cannot be avoided, since our nation — any nation, for that matter — must decide what its public policies are. But politicization, the reduction of the gospel to policy and of Christianity to party, both can and should be avoided, lest the good news be tarnished by the lust for earthly power.

“Partisan commitments have come and gone,” Kidd concludes. “Sometimes evangelicals have made terrible political mistakes,” mistakes that he documents in his book, though the mistakes are leavened somewhat by evangelical successes. “But conversion, devotion to an infallible Bible, and God’s discernible presence are what make an evangelical an evangelical.”

Whether the term evangelical can be rehabilitated to shed its racial, ethnic, and partisan connotations is an open question. If that question is to be answered affirmatively, however, it will likely be along the lines Kidd sketches in this historical introduction to the religion of the born-again, which I fervently hope will be born again.

Book Reviewed
Thomas S. Kidd, Who is an Evangelical? The History of a Movement in Crisis (New Haven, CT: Yale University Press, 2019).

P.P.S. This review first appeared at InfluenceMagazine.com and is posted here with permission.

Today, I made a presentation on payday lending at Evangel University’s Compassion Symposium.

Here’s an additional video about who uses payday loans and why:

I referenced the following Scriptures:

I referenced the following documents: 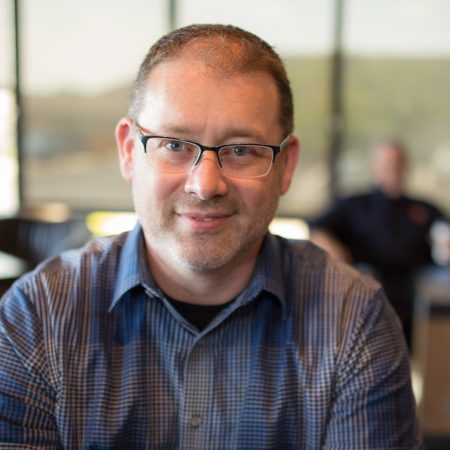 In a recent article for InfluenceMagazine.com, Mark Entzminger wrote: “[A] poorly designed or implemented safety plan can not only damage the church’s reputation in the community but, more importantly, it can also damage the heart and spirit of a child for a lifetime.”

I’m George P. Wood, executive editor of Influence magazine and your host. In this episode of the Influence Podcast, I’m talking to Entzminger about why churches must put child safety first and how they can do so. Entzminger is national director of Children’s Ministries for the Assemblies of God (USA).

This episode of the Influence Podcast is brought to you by My Healthy Church, distributors of Balanced Budget, Balanced Life.

People don’t plan on having money troubles, which is exactly the problem: They don’t plan! In Balanced Budget, Balanced Life, Rollie Dimos shows you how to make a biblically sound financial plan and stick to it. Get back the time and resources you need to stop stressing out about money, and start enjoying the balance of a truly abundant life.

P.S. This podcast was recorded for InfluenceMagazine.com and appears here by permission.

“Many Assemblies of God ministers are doing fine financially, but a significant group is experiencing considerable financial difficulty.” That’s the first sentence of the Ministers and Finances Study published by the AG’s Center for Leadership and Stewardship Excellence.

In this episode of the Influence Podcast, I’m talking to Rollie Dimos about the concerning results of that study, as well as what to do about them. I’m George P. Wood, executive editor of Influence magazine and your host.

Rollie Dimos is director of Internal Audit for The General Council of the Assemblies of Godas well as director of its Center for Leadership and Stewardship Excellence. He is author of Balanced Budget, Balanced Life: 10 Steps to Transforming Your Finances(Salubris Resources), which is also available in Spanish as Presupuesto Equilibrado, Vida Equilibrada.

P.S. This podcast is cross-posted from InfluenceMagazine.com with permission.

Don Everts is a writer for Lutheran Hour Ministries and associate pastor at Bonhomme Presbyterian Church in St. Louis, Missouri. He is also author of several books about evangelism, most recently, The Reluctant Witness: Discovering the Delight of Spiritual Conversations, published by IVP Books.

For free online resources about how to engage in better spiritual conversations, go here.

And to read my review of The Reluctant Witness, go here. If you like my review, please click “Helpful.” 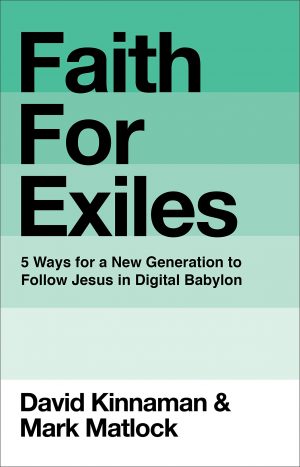 Many Christians in America feel alienated from their culture. David Kinnaman and Mark Matlock explain why when they describe changes happening in North America and elsewhere as a transition from “from faith at the center to faith at the margins.” Moving from the cultural center to the cultural margin is a profoundly disconcerting experience.

No wonder, then, that so many of us look to Biblical stories about the Babylonian exile to formulate our response to an increasingly post-Christian America. This includes Kinnaman and Matlock, whose new book is titled, Faith for Exiles: 5 Ways for a New Generation to Follow Jesus in Digital Babylon. Kinnaman is president of Barna Group, a leading research company; Matlock is principal of WisdomWorks, a leadership consulting firm.

According to them, digital Babylon describes America’s “accelerated, complex culture that is marked by phenomenal access, profound alienation, and a crisis of authority.” This definition draws on Kinnaman’s earlier book, You Lost Me, as well as subsequent Barna research. The earlier book asked why young adults raised in church were leaving the faith. Faith in Exile asks why they’re staying.

Kinnaman and Matlock focus on the experience of young Americans, ages 18 to 29, who grew up Christian. They offer a fourfold typology of these young adults:

The authors believe that the goal of a church’s discipleship ministry today is “to develop Jesus followers who are resiliently faithful in the face of cultural coercion and who live a vibrant life in the Spirit.” In other words, the goal is to develop resilient disciples.

Faith in Exiles drills down on the quantitative and qualitative data that underlies Barna’s research and identifies five practices that characterize resilient disciples. They are:

Though the five practices emerged from Barna’s research, Kinnaman and Matlock show they are consistent with Scripture and illustrate them with anecdotes from everyday life.

As a parent and as a Christian minister, these five practices resonate with my own experiences and goals. One of the tendencies I have noticed among my fellow Christians is a tendency to retreat behind the barriers of safe, institutional Christianity. Somewhat ironically, the most vibrant, effective Christians I know resist this tendency. They are “in” the world, but not “of” it, to borrow language from Jesus’ High Priestly Prayer in John 17:16, 18. If our children or church members never venture beyond the four walls of the Church, they will never develop the spiritual, intellectual, and missional muscles that Christ exercised and expects His followers to develop.

So, who should read this book? Pastors and other church leaders, of course, who are charged by Jesus Christ to “make disciples” (Matthew 28:19). I also think Christian parents could benefit from reading the book, however. I know I have.