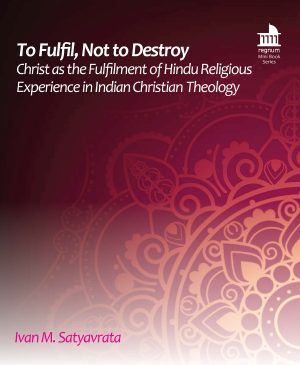 Ivan M. Satyavrata’s To Fulfil, Not to Destroy is an epitome of the author’s doctoral dissertation, published as God Not Left Himself Without Witness.

The “fundamental question” the book asks is this: “Is there a way of relating the Christian faith and experience to other religions, which ascribes genuine value to the religious experience of people of other faiths, while affirming the essential claims of the Christian faith?” (Loc. 93).

Satyavrata argues that fulfillment theology offers an affirmative answer. He defines “fulfilment theology” as the theory which teaches that “all religious traditions have partial access to the truth, to spirituality, and to transcendence, but Christianity has access to them in all their fulness” (Loc. 108).

The history of Christian theology offers three models of fulfillment theology: “First, in the emergence of the Gospel from its theological cradle, the Jewish faith. Secondly, in the early Church’s encounter with Greek culture in the second and third centuries. Thirdly, in the nineteenth century Protestant missionary encounter with the religions of India” (Loc. 115). Satyavrata names these the “prophetic or promise” (Loc. 132), “Logos-historical” (Loc. 138), and “evolutionary fulfilment” (Loc. 152), models of fulfillment, respectively.

While there are differences between these models, Satyavrata writes: “All models of fulfilment accept the provisional nature of other religions with varying degrees of emphasis. All agree that these religions express human anticipation of something fuller, the fulness offered only in Christ. As Christ becomes known, he transforms, subsumes, and replaces all pre-Christian religions” (Loc. 160).

With this definition and typology in mind, Satyavrata spends the remainder of the book outlining the use of fulfillment theology in Christian mission to the Indian subcontinent. He looks specifically at the Scottish missionary John Nicol Farquhar and the Hindu converts Krishna Mohan Banarjea and Sundar Singh.

Early evangelical missions to India were negative and polemical, deeming “Hinduism” (a scholarly construct of the indigenous religious of the Indian subcontinent) as wholly without value. In combination with British imperialism, this confrontational approach alienated the Indian population from the gospel. The approaches taken by Farquhar, Banarjea, and Singh were positive and irenic, without, however, surrendering the finality of Christian revelation.

Although fulfillment theology won the theological day among missiologists in the late nineteenth and early twentieth centuries, it has fallen out of favor today for two reasons. First, it presumes a continuity between general revelation and specific revelation, whereby non-Christian religions can reflect the former and thus be fulfilled by the latter. However, in the mid-twentieth century, Hendrik Kraemer’s Barth-like missiology, which made the two radically discontinuous, won the day. Second, it presumes the finality of Christian revelation, which is controversial among religious pluralists, who believe, roughly, that all religions are equally valid, albeit partial, expressions of spiritual reality.

Satyavrata nonetheless concludes that fulfillment theology should be a live option for Christian mission in India, especially to counter the rise of Hindutva, which maintains that Christianity is a Western imperial intervention contrary to indigenous Indian spirituality. He concludes:

“Fulfilment theology enables the church to be faithful to its stewardship of the story of God’s decisive word and action in Christ, while demonstrating that there is nothing intrinsic to Christian faith that threatens the future of any indigenous cultural heritage. It can provide a basis for the Church to co-operate with people of all faiths in furthering the kingdom purpose of God for a better world, free of poverty, injustice and strife, challenging what is deficient and affirming what is of value in every religion, including Christianity as a religious system” (Loc. 808).