A Deadly Act begins with a famous Israel actress, permanently disabled by a car accident, revealing who murdered a colleague five years earlier. At least she thinks she knows. She doesn’t have proof, however—only circumstantial evidence and a woman’s intuition. So, she hires Adam Lapid to investigate a case that has gone long cold.

This book is the fifth installment in Jonathan Dunsky’s Adam Lapid mysteries. (I reviewed the previous installments here,here, here, and here.) All the books are set in Tel Aviv in the aftermath of Israel’s War of Independence (1947–1949). Lapid is a former Hungarian police officer, Auschwitz survivor, Nazi hunter, Israeli war hero, and now private detective.

Set in 1951, A Deadly Act is best characterized as hardboiled, featuring a brooding detective haunted by his past living in a city beset with difficulties on all sides: economic rationing, political squabbling, and ever-present worries about the Arabs. On top of that, a black marketer has taken a strong dislike to Lapid, threatening to harm him. Even the murder victim—a young actress is a well-regarded theater company—has a tragic backstory, her unsolved death only adding to the sense of tragedy that pervades the novel.

And yet, Lapid is the kind of detective who, once he’s pulled a thread, keeps pulling until the entire mystery has unraveled, exposing the murderer. My primary criterion for a mystery is whether it keeps me turning pages to find out what happens next. My secondary criterion is whether it stays within the boundaries of my wiling suspension of belief. A Deadly Act meets both criteria. It kept me reading, and it didn’t require credulity of me.

Toward the end of the novel, as the plot took yet another direction, I wondered for a moment whether the book story was too long. In the end, however, the revelation of the murderer made sense of the plot twists that had gone before. The book is dramatic. Fittingly, its denouement takes place on stage.

If you like the hardboiled feel of mid-twentieth-century American crime novels, I recommend Jonathan Dunsky’s Lapid mysteries. A Deadly Act is a nice addition to the series, and I look forward to the sixth novel. Don’t keep me waiting too long, Mr. Dunsky!

P.S. If you liked this review, please click “Helpful” on my Amazon review page. 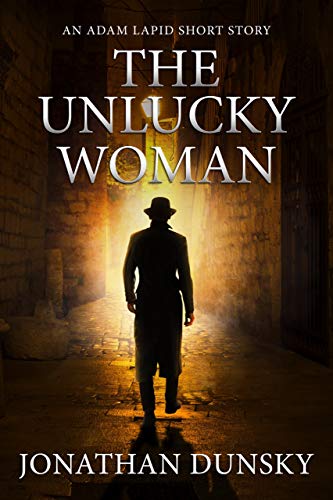 Hilda Lipkind is an unlucky woman. Seven months pregnant–after three miscarriages–she is worried that her husband David is cheating on her. So, she hires Adam Lapid to track down David’s paramour. The truth, however, is more complex and results in tragedy.

The Unlucky Woman is a short story, not a novel, and a quick read. While I am a fan of the Adam Lapid mysteries, set in post-Independence Tel Aviv, I didn’t enjoy this story as much as I enjoyed the previous novels, hence the three-star rating.

P.S. If you liked my review, please vote “Helpful” on my Amazon review page.

A Debt of Death begins with Adam Lapid looking at his friend’s body in a Tel Aviv gutter. A friend who helped him survive Auschwitz. A friend whom he worries he might’ve gotten killed.

This is the fourth installment in Jonathan Dunsky’s series featuring Israeli private investigator Adam Lapid. Almost no one escapes suspicion in this hardboiled tale mixing love, obligation, hope, despair, counterfeiting, the black market, and murder. And just when you think Lapid has collared the perpetrator, he reveals a new layer to the mystery.

To my mind, this is the best of the Adam Lapid mysteries published so far, though all have been page-turners, which is my basic rule in reviewing fiction. It fully merits a five-star review. I only hope Jonathan Dunsky has more stories in the works. Having read through the first four books in the last two weeks, I’m already jonesing for another.

When a man greets Adam Lapid on the streets of Tel Aviv, Lapid recognizes him as a fellow prisoner at Auschwitz named Yosef Kaplon. A few days later, Kaplon slits his wrists and a friend asks Lapid to figure out why. His investigation opens a window on Holocaust survivors, collaboration, and vengeance.

Before the 1961 Adolf Eichmann trial, many Israelis poorly understood the experience of European Jews who had survived the Shoah, and the survivors rarely spoke about their experiences.

Some Israelis—sabras, “natives”—felt that European Jews had been too weak and compliant in the face of oppression. The “new Zionist man” would show the world that Jews couldn’t be pushed around. Survivors felt differently, of course. There had been little they could do, and there were few Gentiles willing to help.

After the war, radicals began targeting Nazi officers and camp guards for assassination because the Allies were doing relatively little to bring the perpetrators of genocide to justice. This the background leading up to the Mossad’s capture of Eichmann in 1960. The radicals also took a dim view of European Jews whom they felt had collaborated with the enemy: the Judenrat(ghetto police), Kapos(concentration camp supervisors), even musicians forced to play in camp orchestras.

Dunsky uses this mix of survival, collaboration, and vengeance as the background to The Auschwitz Violinist, which is the third Adam Lapid novel. On the whole, he does a good job. I will note, however, that when Dunsky introduced a particular character in particular, I had a premonition he would turn out to be the bad guy. And I was right. I can’t say whether this was because I have read too many mysteries or because Dunsky telegraphed the ending unwittingly. Probably the former.

So, three stars for The Auschwitz Violinistfrom me, but it’s still a page-turner, and I look forward to the fourth novel in the series. 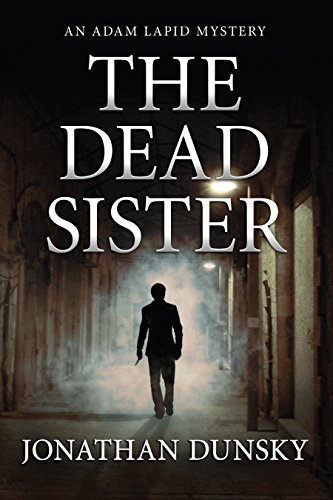 “I knew he was an Arab the moment I saw him.” With these words, Jonathan Dunsky opens The Dead Sister, the second in a series of mysteries featuring Adam Lapid. They are pregnant with meaning, given that the story takes place in Tel Aviv in October 1949.

On May 14, 1948, Israel had declared independence. The next day, five Arab nations declared war on Israel, vowing to fight with and on behalf of Palestinian Arabs in order to erase the Jewish state. A U.N.-sponsored armistice ended the war on March 10, 1949.

In the aftermath of the war, approximately 700,000 Palestinian Arabs were displaced from their homes, an event they memorialize to this day as the Nakba(“Disaster”). A slightly larger group of Jews were expelled from their ancestral homes in the Middle East, most of them settling in Israel. Tensions continued to run high between Palestinian Arabs and Israeli Jews, many of whom had literally fought one another just months earlier.

So when Ahmed Jamalka asks Adam Lapid to solve the mystery of his sister’s murder, it’s not a foregone conclusion that Lapid will take the case. They had fought on opposite sides of the recent war, after all. But the case has languished in the hands of Tel Aviv police, who think the woman’s death is an honor killing. But larger forces are at work, and Lapid’s sense of justice drives him to follow the clues wherever they lead, whatever forces they offend.

And in the end, we discover, as Solzhenitsyn so famously put it: “The line separating good and evil passes not through states, nor between classes, nor between political parties either—but right through every human heart—and through all human hearts.” Arab andIsraeli. 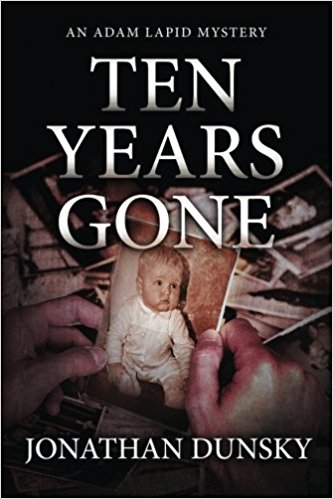 Ten Years Gone brings together three things I love: Israel, mystery, and sequels. It is the first of four novels by Jonathan Dunsky featuring Adam Lapid, a private detective in post-Independence Tel Aviv. (By first, I mean that the events it narrates come first in the series. It was actually written third.) Having completed it, I’m already on to the next novel, The Dead Sister.

Lapid was a Jewish police detective in Hungary before World War II. His wife and children didn’t survive Auschwitz, but he did. After the Allies liberated Buchenwald, he stayed in Europe for a time, hunting down former Nazi officers and meting out vengeance. Then he immigrated to Palestine, joined the Haganah, and fought heroically in the War of Independence. After the war, he took up private detecting on the streets of Tel Aviv.

In that capacity, a German Jewess who was able to pass herself off as Gentile during the war comes to him with a request. In 1939, she had sent her son ahead with a friend to Palestine, hoping soon to follow in their steps. That didn’t happen. Ten years later, she can’t find either the woman or her son, so she hires Lapid to do so.

The problem? Both the woman and the boy were murdered in 1939. Lapid doesn’t have the heart to tell his client just yet, so instead, he reopens the case to solve their murders. Along the way, he uncovers secrets and lies involving the dead woman, her circle of acquaintances, and the Irgun, the radical group which worked hard in the pre-Independence era to speed both Jewish entry and British exit from Palestine…violently, if necessary.

The tale is competently told. It’s not at the level of Michael Connelly’s Harry Bosch novels or Daniel Silva’s Gabriel Allon novels, but it’s good. My first rule for evaluating mysteries is that it must keep me turning pages to see what happens next. Ten Years Gonedid. I look forward to reading the other books in the series.