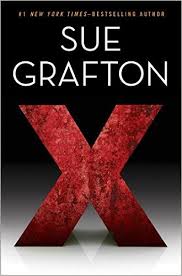 I am a huge fan of this series, having read each of the novels in order, beginning with A Is for Alibi. Patrick Anderson has written, “Grafton’s Millhone books are among the five or six best series any American has ever written.” I agree. Kinsey is likeable, whip-smart, and plucky. You cheer for her as she sees justice through in each case.

That said, X is the best novel of the series. (I wonder if it has to do with the difficulty of finding a suitable crime to include in the title. The other novels follow the A Is for Alibi title formula. Here, there’s no X Is for _____.) It opens with one story line but spends the bulk of the novel focused on the other story line. The lines never come together, and the annoying neighbors seem like a distraction too. The neighbors get what’s coming to them in the end, but of the two major storylines, only one reaches a satisfactory resolution.

X may not be the best novel in the series, but it’s always good to hear from Kinsey. I’m already looking forward to Y.