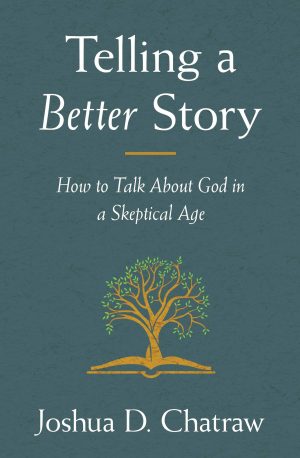 In an increasingly post-Christian America, apologetics — the defense of the Christian faith — is a necessary component of evangelism and discipleship. Christians need to “be prepared to give an answer [Greek, apología] to everyone who asks you to give the reason for the hope that you have” (1 Peter 3:15). How they can do so well is the subject of Joshua D. Chatraw’s excellent new book, Telling a Better Story.

Apologetics has a bad rap in some quarters. Chatraw tells the story of a student at a Christian university who asked him, “What is your best argument for Christianity?”

When Chatraw answered, “It depends on who I’m talking to and what the situation is,” the student seemed unimpressed.

He was looking for a “knockout punch,” a “winner take all” argument. Here’s a pro tip: Those arguments are vanishingly rare, and anyway, what we want to win is a person, not a debate.

And then apologetics seems far removed from the concerns of everyday life. Chatraw describes the kind of apologetics in which many Bible-believing Christians were trained as “Building Block Apologetics.” The foundation of the pyramid is “universal logic,” rules of thinking that validate a “general theism,” on top of which is “historical evidence” for the Bible. The capstone is “the message of the gospel.” The problem with this kind of apologetics, which moves from the abstract to the concrete, is not that it’s false but that it’s irrelevant to most people. It answers questions they’re not asking and leaves little room for genuine conversation.

Rather than a “knockout punch” or a “rigid system,” Chatraw offers a “way” of doing apologetics that he calls “Inside Out Apologetics.” He explains, “The goal is for both sides to be willing to ‘try on the other story’ and see how it ‘fits’ rationally, psychologically, and experientially.” For the Christian, this involves internalizing certain questions and applying them prudently in conversations:

Chatraw cites Paul’s Areopagus speech as an example of an inside-out approach (Acts 17:22–31). Inside: “[Paul] quotes pagan sources and affirms where Athenian thinking is correct,” but he also “challenges their culture by using one of their own beliefs to demonstrate that God must be independent from his creation.” Outside: Paul invites the Athenians to view life through a Christ-centered lens: God “has set a day when he will judge the world with justice by the man he has appointed. He has given proof of this to everyone by raising him from the dead” (Acts 17:31).

If Acts 17:32 is any guide, inside-out conversations do not guarantee conversions, either for Paul or for us. They do lead to more productive conversations with those willing to invest the time, however. And that’s what budding Christian apologists should aim for.

The bulk of Telling a Better Story demonstrates how an inside-out approach might work in conversations about five common cultural assumptions in post-Christian America:

I don’t know about you, but I see variations on these assumptions every day in my social media feed. These are the questions people are asking, and therefore the questions Christians need to be prepared to discuss.

Of course, once you commit to having a conversation with someone who does not share your Christian faith, you’re committing to hearing their pushback on that faith. Chatraw rounds out his book with three common objections to Christianity: it’s oppressive, unloving, and untrue. He concedes— rightly, in my opinion — that our skeptical friends sometimes have a point. Christians have not always acted Christianly: liberatingly, lovingly, rationally. There are nonetheless reasons to believe, and to act on the belief, that the gospel is true.

Telling a Better Story concludes with a quote from Soren Kierkegaard: “Christ is the truth in the sense that to be the truth is the only true explanation of what truth is.” In post-Christian America, it is important that we Christians “speak the truth” as we answer the questions of our unbelieving neighbors. More importantly, however, we need to “embody the truth.” This, as Chatraw puts it, is the “greater apologetic.”

P.P.S. This review is cross-posted from InfluenceMagazine.com with permission.