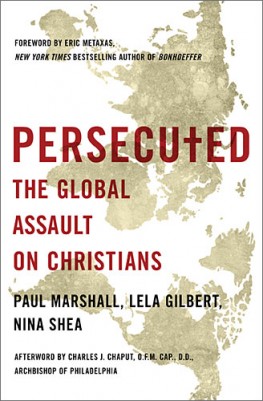 Saeed Abedini is a Christian minister currently imprisoned for his faith in Iran. A native of that country, Abedini converted from Islam to Christianity in 2000 and became a leader in Iran’s house-church movement. In 2005, he moved to America with his wife, Naghmeh, and became a naturalized citizen here as well. In the summer of 2012, he returned to Iran to visit his family and to build an orphanage in the city of Rasht. He was arrested and indicted on unspecified national security violations. On January 27, 2013, he was sentenced to eight years in prison for his house-church activities and for evangelizing Muslims. The American Center for Law and Justice represents Naghmeh Abedini and has started the #SaveSaeed campaign to bring attention to his plight and secure his release.

Though not mentioned by the authors of Persecuted, because his case arose while the book was in production, Saeed Abedini is yet another individual example of their thesis: “Christians are the single most widely persecuted religious group in the world today” (p. 4). Instead of compiling statistics on this problem, the authors of Persecuted document the stories of individuals and communities who, like Saeed Abedini, are suffering because of their faith in Jesus Christ.

Paul Marshall, Lela Gilbert, and Nina Shea are veteran advocates of religious freedom. All are affiliated with the Hudson Institute, and Shea directs that think tank’s Center for Religious Freedom. Each has written extensively on the topics of religious freedom and Christian persecution. Marshall and Shea co-authored Silenced: How Apostasy and Blasphemy Codes Are Choking Freedom Worldwide (2011). Marshall edited Religious Freedom in the World (2007). And in 1997, Marshall and Gilbert published Their Blood Cries Out, while Shea published In the Lion’s Den.

Chapter 10, “A Call to Action,” outlines a strategy of information, prayer, and political action for religious-freedom advocates.

Persecuted is a well-documented book on the persecution of Christians worldwide. I highly recommend it to any person interested in promoting the “First Freedom,” that is, religious liberty. Because nations that don’t respect freedom of religion generally don’t respect other human rights or civil liberties either, raising consciousness about this violation has the salutary effect of raising consciousness about those violations too. Religious liberty is the “First Freedom,” but anyone concerned about it will be ineluctably drawn to concern about second, third, and fourth freedoms as well.

Naghmeh Abedini and Jordan Sekulow appeared on Fox News today to discuss the latest letter from Saeed Abedini, who is imprisoned and being tortured in Iran.