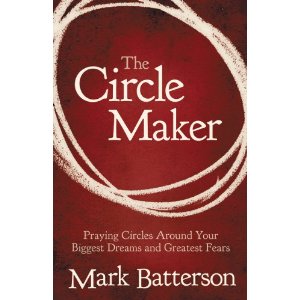 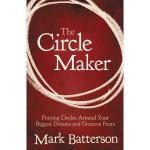 In the First Century B.C., during a period of extreme drought, a Jewish man named Honi stood outside the walls of Jerusalem, drew a circle around himself, and prayed the following prayer: “Lord of the universe, I swear before Your great name that I will not move from this circle until You have shown mercy upon Your children.” Jerusalem’s religious leaders were appalled at this man’s audacity. Then it rained.

Mark Batterson opens The Circle Maker with this story and challenges his readers to pray like Honi. Utilizing biblical narratives, personal testimonies, and a gift for aphorism, Batterson challenges his readers to “dream big,” “pray hard,” and “think long.” In other words, he dares them to ask God for things only he can accomplish, to be persistent in the asking, and to think not of short-term, selfish gain but of long-term, far-reaching benefits for others.

Early on in The Circle Maker, I started to worry that Batterson was veering into “name it and claim it” territory. Like the Honi’s Jerusalem critics, I was forming the impression that Batterson was being presumptuous. But Batterson dispels this impression in a single paragraph: “God cannot be bribed or blackmailed. God doesn’t do miracles to satisfy our selfish whims. God does miracles for one reason and one reason alone: to spell His glory. We just happen to be the beneficiaries.”

P.S. Batterson is releasing a Circle Maker Curriculum Kit, which includes “one hardcover book, one participant’s guide, one DVD-ROM containing four small-group video sessions, a getting started guide, four sermon outlines, and all the church promotional materials needed to successfully launch and sustain a four-week church experience.” Here’s a promotional video for the book and the DVD-based curriculum:

P.P.S. I’m interviewing Mark Batterson about The Circle Maker on Thursday, December 8, at 3:00 p.m. (CST) on MinistryDirect.com/live. You can email questions for Mark to questions@ministrydirect.com, tweet them using #MinistryDirect, or post them on the Facebook message board on the live page. (You must be logged into Facebook to use the message board.)

5 thoughts on “Review of “The Circle Maker” by Mark Batterson”