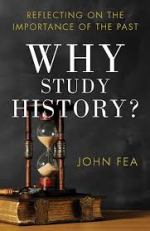 John Fea, Why Study History? Reflecting on the Importance of the Past (Grand Rapids, MI: Baker Academic, 2013). Paperback / Kindle

John Fea sets out to answer this question in his eponymous new book, which is subtitled, “reflecting on the importance of the past.” Fea is associate professor of American history and chair of the history department at Messiah College in Mechanicsburg, Pennsylvania. An evangelical Christian teaching at an evangelical college, he has written or edited several books, including Was America Founded as a Christian Nation? A Historical Introduction[1], The Way of Improvement Leads Home: Philip Vickers Fithian and the Rural Enlightenment in Early America, and Confessing History: Explorations in Christian Faith and the Historian’s Vocation. He blogs regularly at The Way of Improvement Leads Home.

Fea pitches his book primarily to college students interested in the study of history as a major, but also to history teachers and history buffs. I fall into the last category. And as a history buff, I thoroughly enjoyed and highly recommend this book, for several reasons.

First, it helped me understand what good historians do. In chapter 1, Fea outlines the task of a historian with five Cs: (1) “chronicle change over time,” (2) “study the past in context,” (3) pay attention to “causality” and (4) “contingency,” and remember that “the past is complex.” If this is what historians do, then history is an inherently “revisionist” project, though not a relativist one. We can know the past, but we must admit that our current understandings may be inadequate to it.

Second, Fea helped me navigate the various reasons why people study history. Chapter 2 outlines and critiques some of those reasons: for inspiration, to escape the pressures of modernity, to form a personal or social identity, for role models, to advance certain political positions. Chapter 3 identifies a basic problem with all these reasons in the words of L. P. Hartley: “The past is a foreign country; they do things differently there.” When we forget the strangeness of the past, we distort it for present purposes. For Christians, especially in America, one of those distortions is a providential reading of American history that all too often exaggerates our nation’s goodness and downplays its sins. Chapter 4 provides a sympathetic critique of such readings.

The critique of providential readings of history does not mean that Christian historians have no theological resources to bring to bear on their vocation. Chapter 5 shows how the imago dei, the reality of sin, the Incarnation, and moral reflection all should influence how Christian historians do their craft. “The human experience is a drama with many ethical twists and turns,” Fea writes, “but the historian is not always in the business of using his or her voice to preach.”

Fourth, Chapters 6 and 7 showed me how historians—and history-minded citizens—can positively influence civil society. There is an inherent tension between the desire to present the past without ideological blinkers and the desire for history to influence civil society. The way Fea resolves this tension is not by proposing this or that account of history but by emphasizing the virtues of historical consciousness. Studying the past in all its foreignness, seeking to understand it on its own terms and in its own context, draws students of history outside of themselves and their ideological commitments. It is, in other words, a powerful tonic for narcissism.

Finally, in chapter 8, Fea shows history students what they can do with their major. I was not a history major in college, and this chapter had the least relevance to me. Nonetheless, in an era when the financial bottom line plays an often decisive role on what college students choose to major in, and when the humanities especially are taking a lot of hits, it’s nice to see someone present anecdotal evidence for the fact that you can study history and still get a good job.

In an appendix, Fea outlines a proposal for the creation of a “Center for American History and a Civil Society.” If I had some money, I’d definitely invest it in this project. Fea’s vision of how Christians (and others) should study the past and work for a more civil society is one that resonates with me.

[1] I reviewed Was America Founded as a Christian Nation? here and interviewed Prof. Fea here.