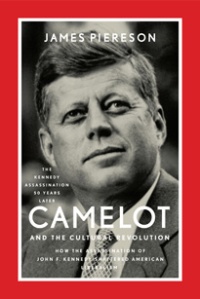 Had Lee Harvey Oswald been a member of the John Birch Society or Ku Klux Klan—or even just a disaffected Southern cracker—the historiography of John F. Kennedy’s assassination would not have been what it has been for the last 50 years, namely, the endless search for a conspiracy. Moreover, the politics of the last 50 years would have been different from what they have been, what with the “vital center” of liberalism steadily losing ground to the New Left.

That these two would-not-have-beens are related is the thesis of James Piereson’s Camelot and the Cultural Revolution: How the Assassination of John F. Kennedy Shattered American Liberalism. Piereson is the president of the William E. Simon Foundation and a senior fellow at the Manhattan Institute. Camelot originally appeared in 2007 but has been reissued with a new Foreword in time for the assassination’s 50th anniversary. Its argument is, to my mind, convincing.

Take the first counterfactual. In the aftermath of the assassination, Jacqueline Kennedy, liberal politicians, and their media courtiers made the argument that a right-wing “climate of hate” was to blame for Kennedy’s death. More generally, America’s predilection for violence had caused the gruesome event. An individual was not ultimately responsible for Kennedy’s death; “they” (the right wing) were. “We” (violence-prone Americans) were. It goes without saying, of course, that there was a particularly noxious climate of hate in Dallas. And Southern states especially had a penchant for unleashing violence against African Americans and other proponents of civil rights.

But here’s the thing: Lee Harvey Oswald was not a right-winger. Indeed, several months prior to assassinating Kennedy, he tried to assassinate that notorious John Bircher and advocate of segregation, Gen. Edwin Walker. Moreover, Oswald held the correct opinions on civil rights—that is, he supported them. Rather, far from being a right-winger, Oswald was a man of the Left. He was a Marxist, a communist, an erstwhile defector to the Soviet Union, and a fulsome supporter of Fidel Castro. Oswald assassinated Kennedy, most likely, because of the latter’s prosecution of the Cold War against Castro.

In the immediate aftermath of the assassination, Mrs. Kennedy and bien-pensant liberals felt that Cold War martyrdom was an undesirable legacy for JFK. So, she recast his assassination as a martyrdom for civil rights. JFK was a new Arthur, his White House a new Camelot, and his support for civil rights “a candle in the wind” reminding others of what could have been had he lived.

But the myth of Camelot introduced a high level of cognitive dissonance into the era’s politics. The facts of the assassination did not match the dominant liberal interpretation of them. So, conspiracy theories began to rise to square that circle. Additionally, had JFK been seen as a Cold War martyr, blame for his death would’ve fallen outside the country. Its source would’ve been external. But because liberalism portrayed him as a civil rights martyr, blame for his death came to be seen as internal—to the right-wing’s “climate of hate,” first and foremost, and to the nation’s predilection for violence secondarily. This inward critique poisoned relationships along the political spectrum by blaming the Right for an act it had not committed, and it set the tone for the blame-America-first rhetoric and actions of the emerging New Left.

Placing blame for JFK’s assassination squarely on Lee Harvey Oswald does not, of course, exonerate the South of its “climate of hate” or predilection for violence against civil rights advocates. Those were very real things. But it does put the blame where it belongs—on an individual rather than a conspiracy, on a communist rather than an opponent of civil rights. Placing the blame rightly probably—undoubtedly?—would’ve changed the subsequent politics of the era. Less anti-Americanism, less infatuation with Marxist liberation movements, less anti-anti-communism.

Unfortunately, history cannot be undone. So we are left with an endless—and fruitless—search for conspiracies behind John F. Kennedy’s assassination, not to mention a poisoned politics in which the Left blames the Right for the crime of one of its own. Camelot and the Cultural Revolution is a valuable revisionist aid against the misremembering of the past, and is therefore highly recommended.