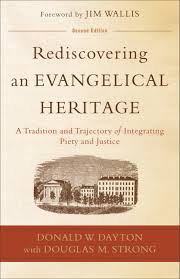 In 1973, some North American church leaders asked Billy Graham to use his influence with President Richard Nixon to try to stop the U.S. bombing of North Vietnam. Graham replied in the pages of Christianity Today by saying, in part, “I am convinced that God has called me to be a New Testament evangelist, not an Old Testament prophet! An evangelist is a proclaimer of the message of God’s love and grace in Jesus Christ and of the necessity of repentance and faith.” The distinction between evangelism and social concern, with the prioritization of the former over the latter, was typical of mid- to late-twentieth-century evangelicalism.

As Donald W. Dayton shows in Rediscovering an Evangelical Heritage, however, it was not typical of nineteenth-century evangelicals. “[W]hile Billy Graham sometimes uses the language of repentance and faith to avoid questions of social responsibility,” he writes, “earlier generations of evangelicals understood that repentance involved turning from apathy into the heart of struggles for social reform. While Billy Graham contrasts the ‘New Testament evangelist’ and the ‘Old Testament prophet,’ earlier evangelicals combined these roles.” Dayton shows this by profiling a number of nineteenth-century evangelicals, as well as the institutions they led. The profiles make for fascinating reading.

Take, for example, the chapter on Jonathan Blanchard, the first president of Wheaton College in Wheaton, Illinois—sometimes referred to as “the evangelical Harvard.” “I came to Wheaton in 1860,” Blanchard wrote, “still seeking a perfect state of society’ and a college ‘for Christ and his Kingdom.’” The latter phrase is well known, since it is Wheaton’s motto. The former phrase—“a perfect state of society”—is less well known, though it perfectly encapsulates Blanchard’s philosophy of social reform. It is the title of a commencement address Blanchard delivered at Oberlin College in 1839. In that address, Blanchard said, “Society is Perfect where what is right in theory exists in fact; where Practice coincides with Principle, and the Law of God is the Law of the Land.” The perfect state of society is nothing less than the kingdom of God. Just as Jesus preached the perfect state of society, so must every Christian minister: “every true minister of Christ is a universal reformer, whose business it is, so far as possible, to reform all the evils which press on human concerns.”

The particular evil that Blanchard is best known for working to reform is slavery, though it was not the only one. Indeed, when the founders of Wheaton College advertised for a president, they looked for someone to uphold “the testimony of God’s word against slave-holding, secret societies and their spurious worships, against intemperance, human inventions in church government, war, and whatever else shall clearly appear to contravene the kingdom and coming of our Lord Jesus Christ.” Blanchard fit the bill and then some. He seems to have had feminist leanings as well, at one point arguing that “the first alteration which Christianity made in the polity of Judaism was to abrogate this oppressive distinction of sexes,” which taught “women had almost no rights; they were menials to their husbands and parents.”

Today, few would use the word evangelical inclusively with words like civil rights advocate, feminist, and peace advocate. For many nineteenth-century evangelicals, however, the words fit together perfectly. I have highlighted Jonathan Blanchard because he was the first president of my alma mater, but his profile bears striking resemblance to others Dayton profiles, such as Charles G. Finney (evangelist and president of Oberlin College), Theodore Weld (author of Slaver As It Is, which Harriet Beecher Stowe reportedly kept under her pillow as she wrote Uncle Tom’s Cabin), Arthur and Lewis Tappan (Manhattan businessmen who funded abolitionist causes), and Orange Scott and Luther Lee (founders of the Wesleyan Methodist Church, which was founded on abolitionist principles). The words also fit together perfectly at Oberlin College, which was a central hub of reformed-minded—even radical—evangelicalism.

By the middle of the twentieth century, the term evangelicalism no longer described American Christians who worked toward “integrating piety and justice,” as the words of the book’s subtitle puts it. Instead, evangelicals—or neo-evangelicals—were conservative supporters of the American status quo. They opposed the Civil Rights Movement. They taught that the complementarity of the sexes required distinct gender roles that disallowed women preaching. They supported the Cold War generally and the Vietnam war specifically. “In the fundamentalist/modernist controversy [of the early twentieth century], and in succeeding decades,” Dayton writes, “the sociological, theological, and historical currents produced a movement that in many ways stood for the opposite of what an earlier generation of evangelicals had affirmed.”

Why had this happened? Part of the answer was sociological. Sustaining a high degree of commitment to piety and justice is not easy. The tendency of institutions is to move from sectarian radicalism to the respectable status quo, which was true of some of the institutions mentioned here, such as Wheaton College and the Wesleyan Church. Part of the answer was theological. In the late nineteenth century, evangelicals increasingly turned from postmillennialism to premillennialism. Whereas mid-nineteenth-century evangelicals worked to reform society in order to set the stage for Christ’s return, late-nineteenth-century evangelicals desired Christ’s return as the necessary precursor for “the perfect state of society” or kingdom of God. And another part of the answer was historiographical. Whereas mid- nineteenth-century evangelicals were theological Arminians and practitioners of Finney’s “New Measures” in evangelism, mid-twentieth-century neo-evangelicals were heirs of “Old Princeton” Calvinists such as Charles Hodge and B. B. Warfield, who were leading critics in their time of Finney’s “New Measures.” The neo-evangelicals simply didn’t see the previous century’s evangelicals as their kind of people.

Rediscovering an Evangelical Heritage is an important book, nearly forty years after its first publication, because it delivers on the title. Evangelicals with left-leaning politics will find in its pages a “usable history” to underwrite their efforts. Though my political predilections lean rightward, I still found Dayton’s argument an engrossing read. Part of this is because my own tradition of Pentecostalism itself is a late outgrowth of mid-nineteenth-century evangelicalism. (See Dayton’s Theological Roots of Pentecostalism, for example.) I share the earlier evangelicalism’s egalitarian tendencies, for example, as well as its revivalism and Arminian theology. But another part is my empathy with its social location. Nineteenth-century evangelicals stood outside of social systems they deemed immoral and unjust and worked to reform them. I feel similarly today about my own social location.

Empathy for nineteenth-century radical evangelicals doesn’t mean we can’t learn from their mistakes. We can see in some a movement from social radicalism to theological heterodoxy. (I’m thinking here of Theodore Weld in particular, who moved form evangelicalism to Unitarianism.) We can see in others a move toward theological rationales for violence. The Oberlin community’s abolitionism, for example, traced a trajectory from “moral suasion” (persuading slaveholders voluntarily to release their slaves) to “moral government” (electing legislatures and passing laws that banned slavery) to civil disobedience (especially with regard to the federal Fugitive Slave Act) to insurrection (when John Brown was executed for his leadership of the attack on the arsenal at Harpers Ferry, Oberlin’s chapel bell tolled for an hour in sympathy). Others too closely connected Christianity with a specific political platform (first the Liberty Party’s, then the Republican’s). And, finally, some evangelicals assumed the right to tell others how to live on a host of issues that others felt was none of their business (temperance, most obviously, and Sabbath laws). America has become a far more diverse society than it was in the nineteenth century. Those who claim to be heirs to that century’s evangelicals need to remember that we do not have the common Protestant culture that they did, and adjust our arguments and attitudes accordingly.

Nevertheless, an evangelicalism that integrates piety and justice is the great need of contemporary American Christianity. Not either/or, but both/and. This is the heritage we need to rediscover and practice anew.