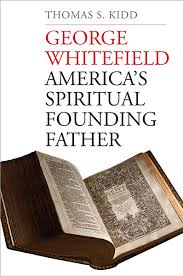 George Whitefield is not well known by Americans today, including American evangelical Christians, his spiritual heirs. In the eighteenth century, however, Whitefield was well known not only in America, but also in his native England—well known, well loved, and widely criticized. Thomas S. Kidd outlines the life of this influential evangelist in George Whitefield: America’s Spiritual Founding Father.

Whitefield was born in a Gloucester inn on December 16, 1714, to hardworking though not particularly religious parents. He secured a work-scholarship to Oxford University, where he fell under the spiritual influence of John and Charles Wesley and entered ministry in the Church of England. Together with the Wesley brothers, Whitefield led the trans-Atlantic evangelical revival that came to be known as the Great Awakening through ceaseless itinerant evangelism, innovative use of print media, and development of personal and institutional relationships across denominations.

“[Whitefield’s] colleague and frequent rival John Wesley left a greater organizational legacy,” Kidd writes, “and his ally Jonathan Edwards made a more significant theological contribution. But Whitefield was the key figure in the first generation of evangelical Christianity.” Kidd concludes: “Whitefield was the first great preacher in a modern evangelical movement that has seen many. Perhaps he was the greatest evangelical preacher the world has ever seen.”

Reading Kidd’s biography of Whitefield—which will be the standard work for years to come—I was struck by several similarities with contemporary American evangelicalism that are worth noting, both positive and negative.

The first is Whitefield’s blend of principle and pragmatism. Whitefield was an ordained priest in the Church of England and a convinced Calvinist. This did not prevent him from working with English Dissenters and Arminians (at least of the Wesleyan variety), Scottish Presbyterians, or American Congregationalists, however. Rather, with them, he emphasized the experience of the “new birth”—that is, being born again—and the doctrine of justification by faith. These expressed the essence of the gospel.

To proclaim that gospel, Whitefield pragmatically utilized a variety of innovative techniques. These included itinerant evangelism, field preaching, personal discipleship (the hallmark of Methodism), and the use of newspapers to promote the ministry. The result was a trans-Atlantic revival united by a powerful spiritual encounter and a theology that explained it, far more than by ecclesiology or denominational distinctives.

The second is Whitefield’s emphasis on the ministry of the Holy Spirit, both as the One who brings about regeneration (the technical term for the new birth) and the One who empowers ministers to proclaim the gospel. Wesley’s journals are filled with descriptions of people experiencing the throes of spiritual conviction, not to mention the experience of breaking through to the peace of conversion. He also routinely speaks of the Spirit prompting his actions and words. Kidd even notes a handful of occasions where Whitefield, his colleagues, or his followers may have spoken in tongues. Ironically, in light of the cessationist theology that characterized evangelical Calvinism in the early twentieth century, Kidd points out that the revivalists believed in the contemporary work of the Holy Spirit—though not as Pentecostals do today—while their non-evangelical critics were the ones who were cessationists, believing that the gifts of the Holy Spirit had ceased in the Apostolic Era.

This emphasis on the work of the Holy Spirit was often a help to the emerging evangelical movement, rooting God’s work in the heart and not merely the head, but it was also occasionally a hindrance. Critics routinely accused Whitefield and his followers of “enthusiasm,” a mindless religious ecstasy detached from good theology, good taste, and good sense. Sometimes, they were right. In turn, under what Whitefield assumed to be the prompting of the Spirit, he often criticized non-evangelical ministers for being “unconverted,” that is, not even Christian. This won him few friends among that group. As Whitefield and his followers matured, they learned to distinguish the fire of genuine revival from “wild-fire.”

The third is the paradoxical combination of unity and division. As noted above, the Anglican Whitefield partnered with ministers of other Protestant denominations to promote revival. This is true of evangelicalism to the present day. But just as there are sharp theological disputes today between Calvinist and Arminian evangelicals, there were sharp theological disputes between the same two groups in the eighteenth century. Whitefield was a staunch Calvinist, as was the Welsh evangelist Howell Harris. The Wesley brothers, on the other hand, were equally staunch Arminians. The theological debates between those four individuals, and their respective followers, were intense and often nasty. Nevertheless, throughout his ministry, Whitefield found his way toward cooperation with the Wesley’s in gospel ministry.

The fourth is the confusion of the gospel and patriotism. Whitefield came to prominence during Protestant England’s seemingly endless wars with Catholic powers. Like other Protestants in his age, he viewed the Reformation dispute with Rome as both theological (How are we saved?) and political (Who will rule us?) in nature. During the War of Jenkins’ Ear with Spain and the Seven Years War with France, Whitefield preached pro-English, anti-Spanish, anti-French, and anti-Catholic sermons that are embarrassing to read today. My guess is that in two hundred years, the patriotic sermons of today’s evangelicals will cause readers to blush too.

It has been said that the past is a foreign country. Reading Whitefield’s biography reminds us that his age was vastly different from our own. Like many in America in the eighteenth century, Whitefield owned slaves, a fact for which he can (and should) be criticized. (His marriage was also nothing to write home about.)

On the other hand, the past is not so foreign that it is unable to teach us lessons about our own time. This is especially true of contemporary American evangelicalism. The trans-Atlantic evangelical revival of the eighteenth century initiated patterns of spiritual experience, theological doctrine, and ministry methodology that are still recognizable among American and British evangelicals today, for better and for worse.

As evangelicals move forward in the twenty-first century, it is thus reasonable to ask: Who will be our Edwards, to teach us in this postmodern intellectual milieu? Who will be our Wesley, to organize, network, and disciple us? And who will be our Whitefield—the evangelist whose preaching of the gospel will draw men and women, boys and girls to Christ? Kidd notes that Whitefield was perhaps “the greatest evangelical preacher the world has ever seen.” I would add only five words: though hopefully not the last.