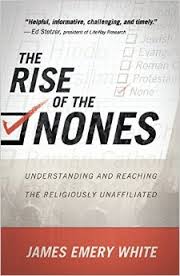 According to a May 2015 report from Pew Research Center, “The Christian share of the U.S. population is declining, while the number of U.S. adults who do not identify with any organized religion is growing.” Sociologists refer to this latter group as nones. When asked to state their religious affiliation—e.g., Protestant, Catholic, Jewish, Muslim, etc.—they choose “None of the above.”

Nones constitute a rapidly growing segment of the U.S. population. According to data from the 2008 American Religious Identification Survey, nones nearly doubled between 1990 and 2008, from 8.1 to 15 percent. Pew’s own data indicate that the share of nones grew by nearly 42 percent between 2007 and 2014, from 16.1 percent of the U.S. population to 22.8 percent.

For Christians committed to obeying the Great Commission (Matt. 28:16–20), nones are a new people group to be reached with the gospel. The question is how. In The Rise of the Nones, James Emery White provides an “analysis” of this demographic (Part 1) that explains “a revolution of mindset and strategy” which the church needs to effectively evangelize them (Part 2).

White has a good handle on both the intellectual and practical aspects of Christian ministry in an increasingly secular culture. He is founding senior pastor of Mecklenburg Community Church in Charlotte, North Carolina, 70 percent of whose total growth has come from nones. And he has a Ph.D. from The Southern Baptist Theological Seminary in Louisville, Kentucky.

According to White, “The real mark of a none is not the rejection of God but the rejection of any specific religion” (p. 23). In that sense, they are “spiritual but not religious.” This spirituality does not turn them into “seekers,” however. Rather, it is consistent with what Jonathan Rauch describes as “a disinclination to care all that much about one’s own religion, and even stronger disinclination to care about other people’s” (p. 27).

White analyzes the causes of this rejection of religion, and the worldview that results from it, in Part 1—an analysis that need not detain us here. Rather, I’d like to focus on the advice for reaching nones that he outlines in Part 2. White notes that most churches’ outreach strategies “rest on a single, deeply flawed premise that people want what you have to offer” (emphasis in original). In the very next sentence, however, he writes: “More often than not, they don’t” (p. 89).

Like Jonathan Rauch, many—if not most—nones simply don’t care about religion. When churches send out slick mailers promising a church experience with a casual atmosphere, contemporary music, relevant messages, and good coffee, nones chuck them in the trash because they already have those things…without organized religion.

What is needed is a new mindset, a mindset that is willing to change the way we do things in order to effectively reach a post-religious generation. Unfortunately, too many churches cater to the spiritual consumerism of existing Christians, even as they vocalize a desire to reach the lost. White doesn’t mince words: “we say we want them [i.e., the nones] in heaven—but we act like they can go to hell” (p. 84).

To reach nones, we need to think of evangelism as both a process and an event. “The goal is not simply knowing how to articulate the means of coming to Christ,” White writes in reference to the conversion event. Rather, he continues with reference to the process of conversion, “it is learning how to facilitate and enable the person to progress…[to] where he or she is able to even consider accepting Christ” (p. 93).

The process of evangelism looks very different in a nominally Christian culture than in a post-religious society. In the mid-twentieth century, when Christian influence was at its peak and churches could assume most Americans identified with and had a basic understanding of Christianity, the process looked like this:

In other words, first unchurched people accepted the gospel, then joined the church, then started supporting the church’s mission.

To reach Baby Boomers, who had been raised in church but left it out of disillusionment in young adulthood, churches tried a different evangelistic process, which looked like this:

In other words, unchurched Baby Boomers needed to trust the church again before they could express commitment to Christ and support the church’s mission.

White argues that the nones require yet another change in the evangelistic process, which looks like this:

Notice that White has not discarded the event of evangelism, namely, a call to repentance and faith. The strategy he outlines pertains to the process whereby nones see that conversion to Christ makes sense. “Even if it takes a while to get to talking about Christ,” he argues, based on ministry experience, “[nones] get there” (p. 108).

White’s discussion of mindset and strategy includes far more than I’ve outlined in this review. To get that, you’ll need to read the book. And I worry that a focus on cause may become as unattractive to nones as slick mailers advertising a “casual atmosphere” and “good coffee.” Nones don’t need to go to church to get coffee; do they need to go to church to get a cause? A church not committed to the common good is not representing Jesus well, but nones won’t necessarily come to Christ just because the church pursues it.

Regardless, I recommend The Rise of the Nones for its thought-provoking analysis and guidance regarding mindset and strategy. I haven’t touched on all the points White makes, but I hope this review has given you a better understanding of the challenge of and a strategy for reaching nones. They’re not interested in religion—yours or their own. To get them to Christ, you must start with what interests them and draw them—slowly, patiently—to Jesus.

P.S. If you found this book review helpful, please vote “Yes” on my Amazon.com review page.