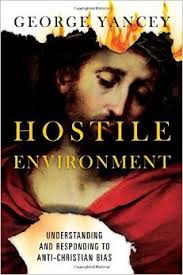 Christianophobia can be defined as “an irrational animosity towards or hatred of Christians, or Christianity in general.” Rupert Shortt used the term to describe the persecution of Christians around the world.[1] In his new book, George Yancey uses it to describe animus against Christians in the United States.

Yancey is professor of sociology at the University of North Texas. In Hostile Environment, he draws on research about Christianophobia published in So Many Christians, So Few Lions: Is There Christianophobia in America, a book he coauthored with David A. Williamson. Using a quantitative approach that measured affection for religious groups, Yancey and Williams determined that only atheists were disliked more than conservative Christians. Using a qualitative approach, they asked “cultural progressive activists” to describe their feelings about conservative Christians, which were typically negative.

Yancey explains the negative feelings these people hold against Christians in terms of “group interest” and “group threat” theories. He writes: “[Cultural progressives] want to shape society in the ways that serve their social and political interest, and see conservative Christians as interfering with their ability to do so.” In the words of one of the activists Yancey and Williamson surveyed, “I wish [conservative Christians] would keep their noses out of science education, sexual health education, abortion clinics, etc…. Let’s discuss reality, not your favorite Sky-Daddy’s personal preferences.”

American Christianophobes do not want to outlaw Christianity or persecute Christians, as happens in varying degrees to Christians around the world. They do want to confine the social influence of conservative Christianity, however. As one activist put it: “Keep your beliefs out of the public arena; they have no place in government. Celebrate your religious choices in your unrestricted houses of worship and let others do the same.” Christianophobes “fear the loss of their rights if Christianity is allowed to flourish.”

Yancey—who is an evangelical Christian—writes candidly that conservative Christians have earned a degree of opprobrium through bad actions. He identifies two “dysfunctions” in particular: (1) “when we clearly violate norms we say we value” and (2) “when Christians try to live out their beliefs but do so in harmful ways.”

But even this concession does not explain the totality of Christianophobia. Yancey notes that many Christianophobes derive their impression of conservative Christians not from personal relationships with them but from media reports about them. “Have never personally met a member of the Christian Right,” one survey respondent wrote. “All my exposure to them and their beliefs has come from television, newspapers, magazines and the Internet. All my exposure to the Christian Right through the media only served to reinforce my negative views of them.” If you dislike a person’s politics and view media that reinforces that dislike, your dislike is based on an echo chamber rather than reality.

Yancey concludes his book with suggestions about how to deal with Christianophobes. “As Christians, we have to confront sins against our fellow brothers and sisters as aggressively as we confront sins against non-Christians,” he writes. “But we have to do so in a way that does not dehumanize even those seeking to silence Christians.” This means loving our enemies, as Jesus taught us to do (Matt. 5:44). “If we get the opportunity, we must act in ways that benefit them, whether by providing resources, advice on issues they will listen to us on, or time and attention, or by any other way we might serve them.” Such service may secure good will toward Christians, but whether it does or not, it is the right thing to do.

Do some Americans hold an irrational animosity toward Christians? Yes. Based on Yancey’s research, Christianophobia cannot be denied. Yet neither should it be exaggerated. American Christians are not persecuted, as they are in other countries. Nor is their experience of hatred as extreme or consequential as the racism directed toward African Americans. Even so, it exists.

Where Christians have given others cause to hate them, they should repent. Where they experience undeserved animus, they should speak the truth in love. And in all things, they should follow the Golden Rule, treating others as they wish others to treat them (Matt. 7:17).

One thought on “Review of ‘Hostile Environment: Understanding and Responding to Anti-Christian Bias’ by George Yancey”