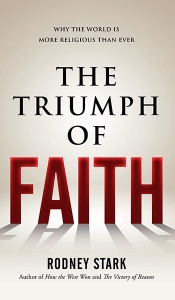 Rodney Stark, The Triumph of Faith: Why the World Is More Religious Than Ever (Wilmington, DE: ISI Books, 2015). Hardcover | Kindle

Fifty years ago, Anthony F. C. Wallace expressed the belief of many Western intellectuals when he wrote, “Belief in supernatural powers is doomed to die out all over the world as a result of the increasing adequacy and diffusion of scientific knowledge…. The process is inevitable.” Scientific knowledge, it was thought, would lead to material wellbeing, and material wellbeing would lead to a secular society. For mid-century Western intellectuals, the future looked godless.

A funny thing happened on the way to secularity, however. As Rodney Stark writes in The Triumph of Faith, “The world is not merely as religious as it used to be. In important ways, it is much more intensely religious than ever before; indeed, it is far more churched” (emphasis added). To prove this point, Stark takes readers on a whirlwind tour of global religious trends.

Stark notes that secularization theorists “limit the focus [of their thesis] to major, well-organized faiths such as Christianity and Hinduism. Thus, five people who have ceased attending church and say they no longer believe in Jesus are counted in favor of the demise of the faith, despite the fact that they now are devoted spiritualists.” He goes on to carefully define terms:

With these distinctions in mind, Stark is able to demonstrate, using survey data from the Gallup World Polls, that “a massive religious awakening is taking place around the world.” In many places, this religious awakening is occurring in the adherents of “churched religions.”. He points to the growth of Christianity in Latin America, sub-Saharan Africa, and China; of Islam in the Middle East and North Africa; and of Hinduism in India as examples of this trend.

In other places, it is occurring in the adherents of “unchurched religions” and “unchurched supernaturalisms,” which persist in Europe, Japan, and the Asian Tigers despite their modernization. The proliferation of spiritualities in these places is evidence, Stark thinks, of the truth of the statement often attributed to G. K. Chesterton: “When people stop believing in God, they don’t believe in nothing—they believe in anything.”

The United States has always proven a challenge to the secularization thesis. Though one of the first and wealthiest “modern” nations, Americans have long exhibited high degrees of churched religious behavior. In a series of studies over the last decade, the Pew Research Center has argued that the share of religiously unaffiliated Americans—the so-called “Nones”—is growing at the expense of religiously affiliated Americans. Stark dismisses this as evidence for secularization by pointing out that most of the Nones used to be nominal believers. They didn’t actually change their beliefs or practices, in other words. All they did was drop the religious name. Moreover, many of these people continue to pray, believe in supernatural forces, and even participate in organized religious activities. (Something similar could be said about “secular” Europeans.)

Throughout the book, Stark hints at the reasons why the world is more religious than ever, as his subtitle puts it. He points out that too often secularization theorists have assumed that “the primary social function of religion is to provide people with relief from their material misery.” Karl Marx articulated this so-called “deprivation theory” when he wrote that religion is “the sigh of the oppressed creature…the opium of the people.” Unfortunately, the data don’t bear out such a conclusion. “For more than fifty years, studies in the United States and other Western nations have consistently found that the lower classes are conspicuously absent from the churches on Sunday mornings. Moreover, the major religious movements that have erupted throughout the centuries, in both the East and the West, were generated not by the suffering masses but by dissatisfied elites.”

If not material deprivation, however, what? Stark suggests “spiritual deprivation.” He writes, “The overwhelming majority of people on earth do think about the meaning and purpose of life.” In the conclusion, he writes: “People want to know why the universe exists, not that it exists for no reason, and they don’t want their lives to be pointless. Only religion provides credible and satisfactory answers to their great existential questions. The most ardent wishes of the secularization faithful will never change that.”

By way of concluding evaluation, let me make two points:

First, Stark has identified a crucial flaw in both the secularization thesis and the deprivation thesis that underlies it. The data he cites don’t seem to support either. Supernaturalism and religion, in both their churched and unchurched varieties, haven’t gone away and don’t appear to be going away any time soon.

Second, for Christians, triumph of “faith” is not the same thing as the triumph of the Faith. What we seek is not the growth of generic faith, general spirituality, or non-Christian religions. Rather, we seek more people confessing Jesus Christ as Lord. That is happening, of course, but until Christ returns, we still have a mission to be witnesses for Him “to the ends of the earth” (Acts 1:8).