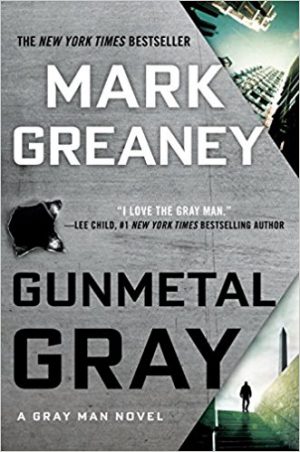 Lee Child says, “I love the Gray Man.” If you like Child’s Jack Reacher novels, you might like Mark Greaney’s Gray Man novels. Both feature a loner with ties to the U.S. government who is known — or in the Gray Man’s case, hired — to mete out rough justice.

Gunmetal Gray finds Court Gentry—aka, “Gray Man”—tracking down a renegade computer hacker for the Chinese Ministry of State Security. At least that’s what he tells them. In reality, he’s running an op for the CIA to find the hacker and deliver him to the U.S. so it can exploit his knowledge of China’s cyber vulnerabilities.

Then the Russians show up. Then a beautiful woman. Then Gray Man finds out the CIA is lying to him. And then things get really complicated.

Mark Greaney is a master when it comes to writing action and suspense. The problem with this novel and the others in the series is that Court Gentry is hard to empathize with, at least in my opinion. Jack Reacher, by contrast, is a gregarious extrovert compared to him.

Additionally, Reacher’s “cases,” if that’s the right word to use, involve real people being abused by powers greater than themselves. By contrast, Gentry operates in a world where even the “good guys” aren’t that good.

So, while I found myself turning page after page when I read Gunmetal Gray, wondering how — and worrying whether — Court Gray would get himself out of his latest scrape, I couldn’t say that I sympathized with his cause. In sum: The book is an eminently readable thriller, even if its protagonist isn’t the most likable guy.