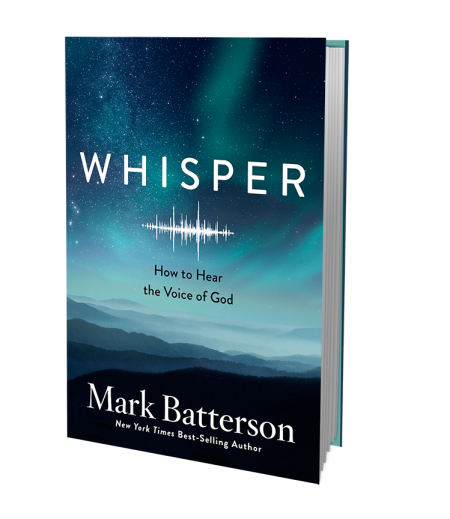 What strikes me most about both forms of revelation is how pervasive they are in terms of space and time. Space: the heavens’ “voice goes out into all the earth, their words to the ends of the world” (verse 4). Time: “The fear of the Lord is pure, enduring forever” (verse 9). (In verses 7–10, fear is synonymous with the words law, statutes, precepts, commands, and decrees.)

God speaks everywhere and at all times, in other words. If that’s the case, then the most important spiritual question is how to hear His voice. That’s the question my friend Mark Batterson takes up in his new book, Whisper.

These dialects are not equal, however. Mark describes Scripture as the “Rosetta Stone” and “The Key of Keys.” It’s the interpretive grid through which all other forms of divine communication must be run. He explains:

When I first read that statement, I thought to myself: Only a Pentecostal could write that. I don’t mean that merely in the narrow sense of denominational affiliation. (Mark is an Assemblies of God minister, as am I.) What I mean is that only a person who believes Acts 2 is paradigmatic rather than merely descriptive can be confident that God’s Spirit continues to guide us in the nitty-gritty logistics as well as the broad, biblical guidelines. That said, Whisper doesn’t engage in flights of charismatic fancy. Mark shows what Scripture itself says about God speaking to us in these seven languages.

I’ll close with a quote from the book’s Epilogue, which epitomizes the content of God’s speech:

God wants us to hear what He’s saying, and we must heed His voice. But much more than that, He wants us to hear His heart. So He whispers softer and softer so that we have to get closer and closer. And when we finally get close enough, He envelops us in His arms and tells us that He loves us.

This is good news, as well as a reminder that if you haven’t heard God’s love in God’s Word, you haven’t listened closely enough.

P.S. This review was written for InfluenceMagazine.com and appears here by permission.

One thought on “Whisper | Book Review”