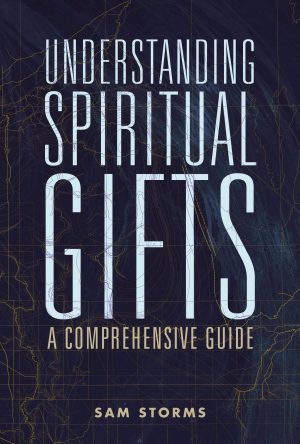 Understanding Spiritual Gifts by Sam Storms describes itself as a “comprehensive guide” to the topic. Its author describes himself as “an Amillennial, Calvinistic, charismatic, credo-baptistic, complementarian, Christian Hedonist.” which helps you understand his theological and ecclesiological point of view (as well as affinity for John Piper!). He is founder of Enjoying God Ministries, senior pastor of Bridgeway Church  in Oklahoma City, Oklahoma, and an erstwhile professor with a Ph.D. in intellectual history from the University of Texas at Dallas.

Storms has published four books and several articles on the topic of spiritual gifts, which he helpfully lists on pages xviii–xix, and from which he has adapted some of the material in Understanding Spiritual Gifts. The previous books include The Beginner’s Guide to Spiritual Gifts (2002, reprinted 2013), Convergence (2005), Practicing the Power(2017), and The Language of Heaven (2019). I have not read the earlier books, so I cannot how or to what extent this book draws on them.

A spiritual gift is when the Holy Spirit manifests his presence and imparts his power into and through individual believers to enable them to exceed the limitations of their finite humanity so that they might faithfully and effectively fulfill certain ministry tasks for the building up of the body of Christ (20).

The author divides his argument into six parts:

As can be seen from these titles, Storms covers the topics that are a matter of sometimes heated debate between continuationists and cessationists, as well as among continuationists, that is, among believers who are Pentecostal, charismatic, and Third Wave.

Storms directs his strongest arguments against cessationism, though these arguments are always graciously expressed. He defines a cessationist as “someone who believes that certain spiritual gifts, typically those of a more overtly supernatural nature, ceased to be given by God to the church sometime late in the first century AD (or more gradually through the course of the next few centuries)” (69). By contrast, a continuationist is “a person who believes that all the gifts of the Spirit continue to be given by God and are therefore operative in the church today and should be prayed for and sought after” (69). He devotes an entire section of the book to refuting cessationism (69–145), but he maintains a running critique of cessationism throughout the book as he examines various biblical passages.

As a charismatic, Storms positions himself between classical Pentecostalism and the so-called Third Wave. He does not affirm Pentecostalism’s interpretation of baptism in the Holy Spirit as an experience separate from and subsequent to conversion, though he does not spend much time developing his critique of its doctrine either (47). Similarly, though he does not address the topic explicitly, it is apparent that he denies Pentecostalism’s understanding of tongues as initial physical evidence, even as he leaves open the possibility that God wants every believer to speak in tongues, if only as a private language of prayer. (225–231).

Storms cites the New Apostolic Reformation (NAR) as the context for discussing the debate regarding apostolic ministry. He writes, “I question whether there would be much of a controversy over the subject of apostleship were it not for the emergence of what is called the New Apostolic Reformation” (295). His treatment of the topic threads the needle between a cessationist denial of even the possibility of contemporary apostles on the one hand and NAR’s extravagant claims about its leaders apostolic giftedness on the other. Storms surveys the New Testament data, which points to a larger group of apostles than just The Twelve plus Paul, seeming to agree with Frank Chan’s definition of an apostles “remarkable leaders sent by God to establish new spheres of ministry by setting up the key governmental structures necessary for those ministries” (295). This definition is broad enough to encompass The Twelve plus Paul, others denominated “apostle” in the New Testament, and contemporary claimants as well.

I have drawn attention to how Storms distinguishes himself from cessationists, Pentecostals, and the Third Wave so that potential readers may understand where he is coming from theologically. However, aside from the extended debate with cessationism, Storms does not spend significant space on in-house continuationist debates. Rather, he works through the New Testament material patiently and thoroughly to arrive at a reasonable interpretation of what the various spiritual gifts are, what they’re for, how to seek them, and how to use them in individual and corporate contexts.

As a classical Pentecostal, I disagree with Storms’ dismissal of Pentecostalism’s doctrines of Spirit baptism and initial physical evidence. I also found his complementarianism irksome, arising as it did in a discussion of why Paul would permit women to prophesy but not to teach men (185–186), although thankfully this is the only reference to complementarianism in the book.

On the whole, however, I appreciated Storms’ exposition of the biblical material, along with his seasoned advice about how to use the gifts, and why. And his running critique of cessationism is worth the price of the book, which is quite reasonable for a text of this length. Whether you’re a pastor or a church member, I recommend Understanding Spirit Giftsas an addition to your library. You don’t have to agree with everything Storms writes to derive value from it