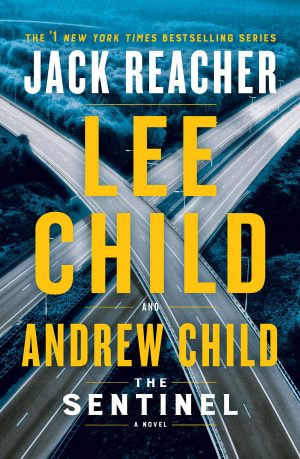 The Sentinel is the 25th novel featuring Jack Reacher and cowritten by Lee Child and his younger brother, Andrew, who according to reports is assuming authorship of the series going forward.

It begins with the attempted kidnapping of Rusty Rutherford, the erstwhile IT manager of Pleasantville, Tennessee, who lost his job and his good name when forces unknown launched a ransomware attack against all the municipality’s software systems. Serendipitously, as is the case with all the novels in the series, Reacher arrives in town just in time to witness and prevent the kidnapping. One thing leads to another, and Reacher finds himself squaring off against the intelligence service of a U.S. national enemy that has a secret buried in the files of one of Pleasantville’s servers that it would rather not see the light of day.

My two rules of thumb for suspense novels are that they keep me turning the page to find out what happens next and that they do not test my willing suspension of disbelief—which all fiction requires of readers—too far. The Sentinel passes both tests, with two caveats:

First, what is captivating about Child’s series is its kinetic force, both figuratively (the pace of his plots move quickly and constantly) and literally (his fight scenes are the best written ones I’ve read). The plot of The Sentinel moves quickly, but I felt it slowed down somewhat in the middle—not so much that I put the book down, but just enough that I noticed it.

Second, nothing in the novel per se tested my willing suspension of disbelief, but as a reader of all the novels in the series, not to mention the numerous novellas and short stories, a nagging suspicion kept lurking in the back of my mind that Reacher is too old to keep beating the younger men who continue to stupidly pick fights with him. In Child’s fictional universe, Jack Reacher was born on October 29, 1960. (The Sentinel rreleased on two days before that date this year, not uncoincidentally.) That means Reacher is 60 years old. Knowing Reacher’s age, and knowing that he’s been effectively homeless for 23 years—the Army cashiered him in 1997, eats garbage food, and stays in rat trap motels, one begins to wonder when (or whether) unhealthy living (and all-out brawls) will begin to take their toll.

Even so, Reacher’s age doesn’t come up explicitly in this novel, so if you don’t know the backstory, that lingering doubt won’t arise. And like I said, the novel is a page-turner.

So, four stars from me. I am very curious about how Andrew Child will move the series forward, so I will make sure to look for his first solo Reacher novel next year…just in time for Reacher’s 61st birthday.