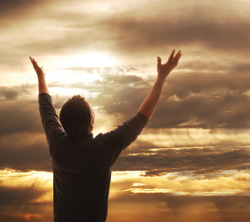 Luke 22:39–46 depicts the last moments Jesus spent with his disciples before his arrest, trial, and crucifixion. He spent the time in prayer. Several important principles about perseverance emerge:

First, Jesus talked to God regularly. According to Luke, “Jesus went out as usual to the Mount of Olives, and his disciples followed him. On reaching the place, he said to them, ‘Pray….’” Matthew and Mark identify “the place” as Gethsemane, a large garden with olive trees (Matt. 26:36, Mark 14:32). Luke may be merely describing what Jesus did that particular week, but it seems more reasonable to interpret him as describing what Jesus did whenever he was in Jerusalem. Jesus went to the place. He used the garden to meet with God. The quiet garden allowed him to center his attention on God and thus prepared him for the trials ahead of him.

Second, Jesus prayed to God for help during trying times. Specifically, Jesus instructed his disciples to pray so that they would “not fall into temptation.” The Greek word Luke uses is peirasmos, which can mean “temptation” or “trial,” depending on context. Both senses of the term are in operation here. Jesus’ arrest, trial, and crucifixion would try the apostles’ souls and tempt them to lose faith and apostatize. Prayer, however, would give them the power to persevere and resist. It will do the same for us.

Third, Jesus surrendered his will to God’s. His prayer was not a bland recitation of religious phrases, however. Luke—a physician—notes that Jesus prayed with such anguish that “his sweat was like drops of blood falling to the ground.” Medically speaking, due to Jesus’ intense stress, the corpuscles just under the surface of his skin broke, and trace amounts of blood mixed with his sweat. (I wonder if we ever pray with such agony.) The content of Jesus’ prayer is what is most important, however. Jesus’ words were simple and went to the heart of what it means to believe in God: “Father, if you are willing, take this cup from me; yet not my will, but yours be done.” That is the constant request we must make when we pray—to surrender our agenda to God’s agenda for us. Such surrender is the essence of faith.

Finally, after prayer, Jesus got back to work. Medieval writers distinguished contemplation and action. Contemplatives devoted their time to prayer and meditation. Activists devoted their time to good works. Obviously, both are necessary; they reinforce one another. Jesus prayed so that he might better accomplish the will of God. And in doing the will of God, he discovered how much he needed God’s strength, which he found through prayer. His contemplation led to action, and his action back to contemplation. The choice between prayer and life is thus a false one. We pray so that we can live better, and in living better, we discover how much we need God’s assistance through prayer.

So, like Jesus, let us pray. And then let us do the work God gives us.

One thought on “Day 39: How Jesus Persevered through Trial”