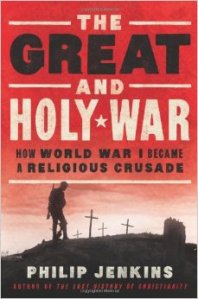 The Great War (1914–1918) is a turning point in world history. It destroyed empires and created nations. It wrecked Christendom, catalyzed secularism, and unleashed global religious forces that continue to affect the world today. “Only now, after a century,” writes Philip Jenkins in The Great and Holy War, “are we beginning to understand just how utterly that war destroyed one religious world and created another.”

Many books have been published to mark the centennial of the start of World War I. Some narrate the history of the entire conflict; others study this or that aspect of it in depth. Jenkins’s book belongs to the latter category. It focuses on how European combatants framed the conflict using the holy war rhetoric of medieval Christendom. Nations used this rhetoric whether or not they had an established state church. Soldiers were viewed as martyrs. They claimed angelic and miraculous interventions on the battlefield. Among the heterodox, paranormal, occult experiences were common. Even radical social movements such as Soviet Communism, though they were avowedly godless, expressed their aspirations in apocalyptic and millenarian terms.

After surveying the religious dimension of the rhetoric and experience of the combatants, Jenkins then shows some of the global consequences that arose in the aftermath of war. The Great War was truly a world war in that the empires fought over their colonies and enlisted their colonized subjects to fight on European soil. As they enlisted this or that colonized group to fight for them, they unleashed forces such as Zionism, anticolonialism, Armenian genocide, African indigenous churches, and politicized Islam—forces that had sometimes explicit, sometimes implicit religious dimensions.

These forces continue to influence world events today. Consider the Israel-Gaza conflict. The British Mandate in Palestine came about because of the Entente Powers defeat of the Ottoman Empire, which until then had held sway in that region. The United Kingdom had promised Zionists that it would work to establish a national Jewish homeland in Palestine in 1917. But it also made promises to Arabs, and established Hashemite kingdoms in Transjordan and Iraq after the war. Facing Western dominance in their ancestral homelands, Arabs developed two contrary responses: a secularized Arab pan-nationalism and a politicized Islam. Secularism was the choice of many Arab Christians and other minorities, who longed for Arab statehood but did not want Muslim dominance. Politicized Islam, on the other hand, longed to reestablish the caliphate, the Muslim umma (peoplehood, empire), and sharia as the law of the land. In Palestine, the Palestinian Liberation Organization and Hamas represent these contrary responses.

Or consider the depredations of the Islamic State in Iraq and Syria (ISIS), which has been in the news of late for expelling Christians from their ancestral homelands. Until the Great War, the Middle East, though predominantly Muslim, contained substantial Christian minorities, groups that claimed direct links to the Apostolic Age and whose tenure in the land preceded the rise of Islam by centuries. This was especially the case in the region now known as Turkey, whose major cities were mentioned in the New Testament and which had been the Byzantine heartland in the 1100 years between Constantine and the fall of Constantinople. In 1915, fearing that the Entente Powers—who explicitly interpreted the Great War in terms of crusade and holy war—would destroy the caliphate and restore Christendom in Asia Minor, the Ottoman Turks began a genocide and expulsion of the Armenians, the Ottoman Empire’s largest Christian minority, as well as against Assyrian and Chalcedonian Christians. The genocide of the Armenians gave the Nazis hope that they likewise could murder the Jews with impunity. “Who, after all,” asked Adolph Hitler, “speaks today of the annihilation of the Armenians?”

It is easy for a Christian to point out these problems, which involve politicized Islam. But Christian readers of The Great and Holy War need to take to heart the lesson it teaches us about how easily biblical images and rhetoric, as well as the images and rhetoric of Christian tradition, can be used to incite, support, and sustain brutal warfare that kills millions. “[I]t is God who has summoned us to this war,” proclaimed Randolph McKim of Washington DC’s Episcopal Church of the Epiphany as the United States entered the war in 1917. “It is his war we are fighting.… This conflict is indeed a crusade. The greatest in history—the holiest. It is in the profoundest and truest sense a Holy War…. Yes, it is Christ, the King of Righteousness, who calls us to grapple in deadly strife with this unholy and blasphemous power [Germany].”

But just three years earlier, German Lutheran pastor Dietrich Vorwerk had reworked the Lord’s Prayer to say, in part, this: “Our Father, from the height of heaven, / Make haste to succor Thy German people. / Help us in the holy war…. In thy merciful patience, forgive / Each bullet and each blow / That misses the mark. / Lead us not into the temptation / Of letting our wrath be too gentle / In carrying out They divine judgment…. Thine is the kingdom, / The German land. / May we, through Thy mailed hand / Come to power and glory.”

Even granting, as Jenkins does, that the Entente Powers had more justice in their cause than the Central Powers had in theirs, the contrary rhetoric of the Christians on both sides of this conflict call into question whether God was truly on either side or whether each was simply using him to justify their nation’s actions. No wonder, in the aftermath of the war, Christendom died in Europe and secularism began to take its place. It had been killed by Christians.

For revealing the religious contours of a European (and American) religious world order now gone; for demonstrating that Christians—not just Muslims—have a history of politicizing their religion for violent purposes, even in recent times; and for showing how the religious world we inhabit is one birthed in the fires of the Great War, I highly recommend Philip Jenkins’s The Great and Holy War.

One thought on “Review of ‘The Great and Holy War: How World War I Became a Religious Crusade’ by Philip Jenkins”