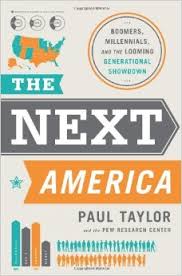 The Next America is not a book about how to contextualize the gospel in contemporary America. At least, that was not Paul Taylor’s intention in writing it. And yet, as I read his fascinating new study, I couldn’t help but notice its missiological significance.

Drawing on reams of research by the Pew Research Center, which he serves as executive vice president, Taylor describes “the demographic, economic, social, cultural, and technological changes that are remaking not just our politics but our families, livelihoods, relationships, and identities. These shifts have left no realm of society untouched.” He goes on to summarize the effects of those changes this way: “As a people, we’re growing older, more unequal, more diverse, more mixed race, more digitally linked, more tolerant, less married, less fertile, less religious, less mobile, and less confident” (p. 6). Throughout the book, he focuses specifically on the generational differences between “boomers” (Americans born from 1946 to 1964) and “millennials” (Americans born after 1980), the former often being parents of the latter.

After an introductory chapter, successive chapters delve into the specifics of generation gaps (chs. 2–4), economic differences (ch. 5), immigration (ch. 6), racial identity (ch. 7), marriage (ch. 8), religion (ch. 9), use of technology (ch. 10), aging (chs. 11–12), and the effect of these changes on America’s social welfare programs (ch. 13). Rather than summarizing the content of these chapters, let me briefly highlight the kinds of questions missionally minded Christians might ask after reading this book:

I recognize that my missiological reading of The Next America may not appeal to all readers. For example, I doubt that atheists, agnostics, or adherents of non-Christian religions and worldviews will purchase this book because of the slant of my review. If so, that’s a shame, for this book provides important information about social changes in America that raise questions all Americans—religious or irreligious—will need to answer in the coming years. If I’ve highlighted this book’s relevance for Christians, it’s only because the trends Taylor analyzes have such clear missiological import.

I highly encourage Christian pastors, educators, and lay leaders to readers this book. I also encourage readers to bookmark both http://www.pewresearch.org and http://www.pewforum.org in their web browsers. These websites, among many sites maintained by the Pew Research Center, provide timely studies that are always worth reading.

P.S. If you found my review helpful, please vote yes in my Amazon.com review page.