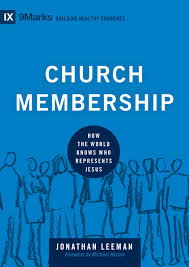 What does it mean to be a member of a church? To answer that question, you must know what the church is. And to know that, you must understand who Jesus is.

The New Testament speaks of Jesus in political terms: He is “Lord” and “Christ,” the one who announces and enacts the “kingdom of God.” On this understanding, the church is an embassy of the kingdom in the midst of a hostile world. Members of that church, then, are “citizens” of the kingdom of heaven, “resident aliens” in the earthly communities where they live.

Of course, the New Testament uses other metaphors to describe the church as well, e.g., body, bride, temple, family, vine, etc. But the kingdom metaphor is the one that Jonathan Leeman emphasizes in Church Membership. He defines the local church as “a group of Christians who regularly gather in Christ’s name to officially affirm and oversee one another’s membership in Jesus Christ and his kingdom through gospel preaching and gospel ordinances” (p. 52). Church membership, then, is “a formal relationship between a church and a Christian characterized by the church’s affirmation and oversight of a Christian’s discipleship and the Christian’s submission to living out his or her discipleship in the care of the church” (p. 64).

There is much to recommend in Leeman’s brief treatment of church membership. For one thing, he helps us see both the essentially communal nature of Christian commitment as well its political implications. There is a reason why totalitarian governments target the Christian church for persecution: Its worship of Christ as Lord relativizes the government’s authority and draws limits to its exercise of power.

Although Leeman didn’t touch on this point, his understanding of church as an embassy of heaven also undercuts efforts in our own country to turn America into a Christian nation. If Leeman is right, this effort is clearly fallacious, for Christian nationalism moves the representation of God’s kingdom from the church to the nation. Nationalism becomes the communal expression of Christian faith, which explains why so many American Christians can see the church itself as optional, but get very upset if you question the benevolence of the American experiment.

The essentially communal nature of Christian commitment, as Leeman presents it, also explains a feature of the New Testament church that is absent from most American churches today: church discipline, up to and including excommunication. If Christ is Lord, if the church is his embassy on earth, and if citizenship in heaven requires both doctrinal and ethical commitments, then it stands to reason that affirmation of citizenship by the church can be revoked for both heterodoxy and immorality. See Matthew 18 and 1 Corinthians 5 for relevant biblical treatments of this neglected aspect of American Christianity.

The great danger of the church’s essentially communal nature is authoritarianism, where the church itself exceeds the limits of its authority. Overbearing pastors, nosy elders, members who want to major on doctrinal minors and promote church conflicts to get their way—all these are the temptations and downsides of the understanding of church Leeman proposes, as he himself acknowledges.

The question, then, is how Christians steer a middle (and biblical) course between individualism on the one hand (where church membership is undervalued) and authoritarianism on the other (where church leadership abuses followers in a pursuit of power). The key, if I understand Leeman correctly, is to keep the gospel central to our practice of church, through biblically grounded preaching and the practice of Christian ordinances (baptism and communion).

Leeman’s church tradition is baptistic, and this informs his understanding of church and membership at points. As a Pentecostal whose fellowship (the Assemblies of God) has been influenced by Baptist theology and ecclesiology on a number of points, I can appreciation this while also realizing that non-baptistic Christians might parse things a bit differently.

Nevertheless, on the whole, I think Leeman is right to emphasize the essentially communal nature of Christianity, especially when American Christianity is so voluntaristic and individualistic. I do wish that he would’ve spent more time exploring how other metaphors might expand, modify, and even soften the understanding of church that arises from giving the kingdom metaphor pride of place. And I do worry that some pastors and church leaders will abuse their positions of authority and cite Leeman’s dictum that the church is “the highest kingdom authority on earth” as their justification.

Still, American Christians have swung so far in the direction of individualism—with all the doctrinal and ethical chaos which it entails—that a move toward an essentially communal understanding of Christian faith, especially one that strives to be gospel-centered and biblically well founded, should be applauded.