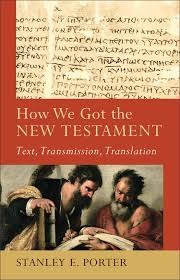 Porter concludes that the New Testament text can be reconstructed reliably, with 80 to 90 percent being “established…regardless of the textual variants present in the manuscript. Moreover, the variants tend—with a handful of notable exceptions—to be minor, neither changing the meaning nor the orthodoxy of the text. With this in mind, Porter takes Bart Ehrman of Misquoting Jesus fame to task for the “unwarranted sensationalism” of that books’ argument.

Regarding the transmission of the New Testament, Porter argues that it is possible “to trace the development of the four Gospel and Pauline letter corpora back to the second century.” He argues that there is some evidence that “the remaining parts of the New Testament [e.g., the catholic epistles] were also being gathered during this time.” This has implications for discussions about the canonicity of the New Testament, though Porter doesn’t explicitly discuss issues of canon. The fact that post-Apostolic Age Christians routinely collected the four Gospels and Paul’s letters (and perhaps the other New Testament writings) indicates, in my opinion, that they held these works in particular regard.

The final chapter, after briefly surveying the early history of translating the New Testament from Greek into other languages and the more recent history of English translations, surveys various issues in the debate over translation theory. Porter demonstrates that the debate is more complex than formal equivalence vs. functional (or dynamic) equivalence. Evangelicals who are accustomed to the polemics between ESV and NIV proponents will discover how difficult translation really is.

In the Introduction, Porter writes, “I conceive of my audience for this book as…an inquisitive and generally well-educated and thinking Christian audience, ideally though not necessarily with some formal theological education.” As an ordained minister with a graduate degree in theology, I think Porter has misestimated his readership. This book will profit theological students and seminarians primarily, though it also makes several proposals scholars might find helpful. Students especially will benefit from the studies Porter so helpfully documents in the footnotes. However, a general Christian audience will likely find themselves unfamiliar with the background knowledge Porter assumes his readers know and some of the terminology he uses, as well as confused by the ins and outs of the academic debates Porter occasionally weighs in on. (Though, as an American, I must concede that general Christian readers in Canada may be better informed than counterparts in the States.)

Even with that qualification about readership, however, How We Got the New Testament is a fascinating, erudite study that I enjoyed and recommend.

One thought on “Review of ‘How We Got the New Testament’ by Stanley E. Porter”