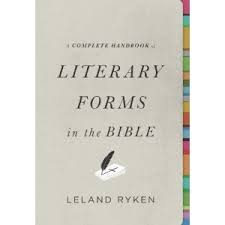 In the introduction to this marvelous little book, Leland Ryken makes a distinction that helps explain why his book is necessary. Some people, he notes, argue that “the literary forms of the Bible are only the forms in which the content comes to us.” By contrast, he argues that the Bible’s literary forms are “the only form in which the content is expressed.” He concludes: “Without form, no content exists. Form is meaning. Meaning is embodied in form.”

If Ryken is correct—and I think he is—then we must pay attention to genres, literary techniques, motifs, archetypes and type scenes, figures of speech, rhetorical devices, stylistic traits, and formulas, for these literary forms are the vehicles by means of which biblical authors, inspired by God, expressed theological, historical, and moral content. Failure to understand the literary form correctly may result in a failure to understand the Bible correctly. We should not interpret a parable as a historical narrative, to cite an obvious example. If we do, we misunderstand both.

The handbook presents literary forms in alphabetical order, beginning with “ABUNDANCE, STORY OF” and ending with “WORSHIP PSALM.” For each form, Ryken provides both definition and example. Most of his entries are noncontroversial, though I think “PARABLE” might ruffle a few pastoral feathers, since it argues that parables are “usually allegorical,” in the sense that “numerous details in most of [Jesus’] parables stand for something else.” My guess is that readers will agree the substance of Ryken’s remarks, even if they chafe at his use of the words allegory and allegorical.

Ryken’s entries, “COMEDY” and “TRAGEDY,” point to architectonic truths about the literary form of the Bible considered as a whole. “It is a commonplace of literary criticism,” Ryken writes in the former entry, “that comedy rather than tragedy is the dominant form of the Bible and the Christian gospel.” Why? “The story begins with the creation of a perfect world. It descends into the tragedy of fallen human history. It ends with a new world of total happiness and victory over evil.” By contrast, as Ryken writes in the latter entry, “The materials for tragedy are everywhere present in the Bible, but the Bible is largely a collection of averted tragedies—potential tragedies that are avoided through human repentance and divine forgiveness.” The biblical metanarrative of creation, fall, and redemption encodes a comic worldview, a hopeful story with a happy ending. No wonder joy is the predominant response to the gospel whenever it is preached!

Those wishing to study the literary forms of the Bible in greater depth can turn to several other works by the same author, including: How to Read the Bible as Literature, Words of Delight: A Literary Introduction to the Bible, Ryken’s Bible Handbook, and Dictionary of Biblical Imagery, which he co-edited with James C. Wilhoit and Tremper Longman III.

Finally, on a personal note, I was a student of Ryken’s in his classes on British Literature and Milton at Wheaton College (Class of ’91). I enjoyed those classes thoroughly, despite the bullwhip. (Don’t ask!) And I continue to profit from his many writings on the literary qualities of the Bible.