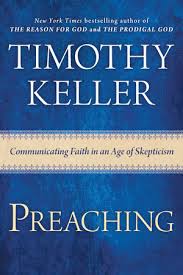 All Christians have a spiritual responsibility to “teach and admonish one another with all wisdom” (Col. 3:16). Some Christians have a further responsibility to teach the word of God more formally, whether in a Sunday School class or from the pulpit. While all Christians can read Tim Keller’s Preaching profitably, it is intended specifically for those with more formal responsibilities to communicate the faith. (Because most readers of this book will be pastors looking for sermon help, however, I’m going to refer throughout this review to preachers and preaching, instead of using broader terms like teaching or communication.)

Part One, “Serving the Word,” argues that preachers should preach the Bible (Chapter 1), which means preaching the gospel (Chapter 2), which means preaching Jesus Christ (Chapter 3), about whom all Scripture is written (Luke 24:27). Keller recognizes that there are times when preachers should deliver topical sermons, but their bread-and-butter sermons should be expositional. Because Scripture tells the unified story of what God has done in Christ through the Spirit to accomplish our salvation, sermons should be gospel-centered. Two dangers need to be avoided: (1) “preaching a text, even about Jesus, without really preaching the gospel,” which is typical of moralistic preaching; and (2) “preaching ‘Christ’ without really preaching the text,” which is typical of proof-texting. To help avoid these dangers, Keller outlines six ways to preach Jesus from all of Scripture that are adequate to both the gospel and the context of a particular passage.

Part Two, “Reaching the People,” opens with the recognition that preachers must contextualize their messages to their audiences (Chapter 4). Such contextualization has biblical precedent. For example, compare and contrast how Paul preached to Jews meeting in a synagogue (Acts 13:14–47) with how he preached to Gentiles meeting on Mars Hill (17:22–31). Contextualized preaching consists of a two-fold movement whereby sermons “adapt to the culture” as well as “confront the culture.” Because God created the world and humanity in his image, he has left traces of himself in all cultures. This makes adaptation possible. But humanity has sinned against God and distorted the goodness of his creation at all levels—individual and social, intellectual and emotional, spiritual and material. This makes confrontation necessary.

Chapter 5, “Preaching and the (Late) Modern Mind,” is the best chapter in the book, in my opinion. It exposes the “baseline cultural narratives” that characterize the late-modern mind. (Keller prefers the term late-modern to postmodern because he thinks contemporary culture is “less a reversal of modernity than an intensification of its deepest patterns.”) These narratives include “the sovereign self,” “absolute negative freedom,” “self-authorizing morality,” and “science as the secular hope.”

Chapter 6, “Preaching Christ to the Heart,” is the second best chapter, in my opinion. It recognizes that people are affective beings, not merely intellectual ones. “Preaching cannot simply be accurate and sound,” Keller argues. “It must capture the listeners’ interest and imaginations; it must be compelling and penetrate to their hearts.”

Part Three, “In Demonstration of the Spirit and of Power” consists of a single chapter about the character of preachers themselves. Keller writes, “your listeners will be convinced by your message only if they are convinced by you as a person.” Preaching, he goes on to say, thus deals with “text” (Bible-gospel-Christ), “context” (culture-heart), and “subtext” (what really motivates the preacher). Though Keller does not point this out himself, these three terms more or less correspond to the threefold division of classical rhetoric: logos (text), pathos (context), and ethos (subtext).

Keller concludes the book with a helpful appendix about “Writing an Expository Message” that focuses on the goal of the biblical text, the theme of the sermon, an outline that develops this theme, and arguments, illustrations, and applications that flesh out this theme. The book concludes with 60+ pages of notes, roughly 20 percent of the entire book. These notes not only identify the source of quotations and books for further reading, they also extend Keller’s analysis. Because they are placed at the end of the book, however, they don’t distract from the development of his main themes. (If you are a fan of Jonathan Edwards, I encourage you to read note 28 on pages 271–275; it shows how Edwards contextualized his preaching to Indians at the Stockbridge Mission.)

Though I found Preaching to be a helpful work, which was especially insightful on late modernity’s “baseline cultural narratives,” I nonetheless found myself asking a few questions.

First, and this is impressionistic, I felt that some of Keller’s examples of how to preach Christ from all of Scripture were not adequate to the text’s context. For example, discussing the horrifying story of the Levite and his concubine (Lev. 19), Keller suggests the following as one of many possible ways to preach Christ from the passage: “When we see a man who sacrifices his wife to save his own skin—a bad husband—how can we not think of a man who sacrificed himself to save his spouse—the true husband?” I see Keller’s point, but is that really a way to find Christ in the text?

Second, Keller defines the gospel in almost exclusively Pauline and Protestant Reformation terms: “we are saved through Christ alone, by faith alone, but not by a faith which remains alone. True salvation always results in good works and a changed life.” This is good and true, of course—see Ephesians 2:8–10, for example—but it fails to take into account other ways of summarizing the gospel, such as that of Jesus himself in Mark 1:15: “The time is fulfilled and the kingdom of God is at hand; repent and believe the gospel.” I can’t help but wonder whether the outline of a kingdom-gospel message fits neatly within Keller’s “metaoutline” for preaching:

Third, Keller’s conversation partners throughout the book are almost exclusively Calvinist. He does mention Protestant mainline preachers, but not evangelical Arminians, Methodists, or Wesleyan-Holiness preachers. (I’m an Arminian Pentecostal.) Given that these non-Calvinist evangelicals have produced quite a few well-known preachers, I can’t help but wonder whether they might have insights to share as well.

In spite of these questions, Preaching is a valuable work by a respected pastor whose judgment on such matters is always worth listening to. I get the feeling I’ll be returning to this book again (and again).