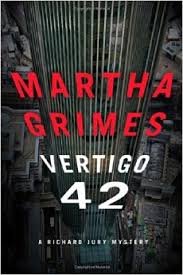 Vertigo 42 is the twenty-third mystery novel Martha Grimes has written, and like the others, it is named after an English pub or bar, this one high atop a skyscraper in downtown London where the action begins. And like the others, Scotland Yard Superintendent Richard Jury sleuths the mystery with help from his friend, Melrose Plant (the former Lord Ardry); his sergeant, Alfred Wiggins; and the cast of characters (in every sense of the term) from Long Piddleton.

The mystery in this case consists of four deaths: Hilda Palmer’s, a nine-year-old who died at Tom and Tess William’s house twenty-two years previously; Tess Williamson’s, who died five years after that; Belle Syms, whose death occurs near the book’s outset; and a man whose death occurs not long after and not far from Ms. Syms. With the exception of the man, who died of gunshot wounds, it’s not clear whether the women’s deaths were accidents, suicides, or murders.

Did I mention Stanley the dog, the “descendant” of Victorian-scourge Lytton Strachey, and Melrose Plant’s fabulous lifestyle? No, well, they’re all there, making for a plot that slowly unwinds and then twists…then twists again. If you’ve read Martha Grimes’ previous Jury novels, don’t miss this one. If you haven’t, start with The Man With a Load of Mischief and work your way through.